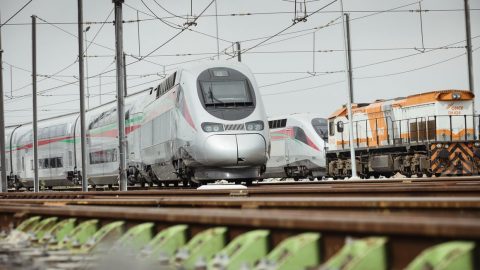 Morocco officially inaugurated the 380-kilometre Tangier-Casablanca high-speed line on Thursday. It is the first of its kind in Africa. The local government intends to build a nationwide railway network for bullet trains.

The official ceremony was held on Thursday in the Moroccan city of Tangier with the participation of King Mohammed VI and French President Emmanuel Macron. The event marked the finish of the first stage of the project started in September 2011. The further stages include the extension of the high-speed service to Marrakech, Agadir on the south and to Fez, Oujda on the east. By 2035, the Moroccan high-speed network will be 1,500 kilometres long.

The project costs 2 billion Euros in total. Half the project was financed by the French government, the other half of the investments necessary were provided by Morocco, Kuwait and UAE. The lines allow the trains to run with a speed of 220 kilometres per hour on modernised sections (between Kenitra and Casablanca) and 320 kilometres per hour on newly constructed sections (between Kenitra and Tangier).

The rolling stock for the high-speed lines and on-board ERTMS Levels 1 and 2 were delivered to Morocco’s national railway operator ONCF by Alstom. “We are extremely proud to bring high-speed rail for the first time to the African continent. This inauguration is a significant milestone for this prestigious project which will allow Moroccan people to benefit from an incredible passenger experience thanks to our comfortable Avelia very high-speed trains,” said Alstom Chairman and CEO Henri Poupart-Lafarge.

The Moroccan high-speed network will be served by twelve Avelia Euroduplex trainsets. The eight-car double-decker units have a capacity of 533 passengers and are adapted to the specific climate and environmental conditions. The trainsets consist of two first-class cars, a dining car and five second-class cars. One part of the train is fully dedicated for people with reduced mobility. Trains are also equipped with bilingual digital passenger information systems, displaying information in Arabic and French.