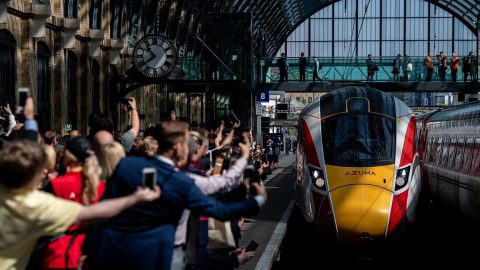 UK operators will replace over half of carriages by 2025

The UK’s passenger railway operators are planning to introduce over 1,000 new and refurbished carriages in 2020. This improvement is a part of a 8,000-coach investment scheduled for the period from 2017 to 2025. After fulfilling the commitments, more than half of the 14,000-carriage ﬂeet running on the UK network will be replaced with the new or retrofitted one.

These figures have been published by Rail Delivery Group, an association of the UK’s railway companies, in a joint investment report for 2020. According to the document, 2,569 new carriages have been already entered service from 2017 to November 2019. In the coming year, the British operators plan to introduce more than 1,000 new and refurbished coaches. These improvements include the investments in rolling stock that will be provided by TransPennine Express, Merseyrail, LNER, Northern, Hull Trains, Grand Central, Greater Anglia, West Midlands Trains, South Western Railway. The remaining 4,500 coaches are scheduled to be inaugurated by 2025.

“Across Britain, money from the public and private sectors is being invested in tangible improvements. In 2020, passengers are going to see over 1,000 extra, better train carriages arriving, part of more than 8,000 new train carriages being delivered between 2017 and 2025 – equivalent to replacing over half of the nations train ﬂeet new for old. Air conditioning, more seats and better Wi-Fi will make journeys more comfortable and the time people spend on the train more productive,” noted Paul Plummer, CEO of the Rail Delivery Group.

The fulfilment of the 8,000-carriage commitment allows the UK’s train operating companies to offer more services to their customers. After introducing the new timetable in December, there will be over 1,000 extra services per week provided by the operators. During the entire investment period from 2017 to 2025, the UK’ railway companies intend to launch 11,300 additional services per week. 4,000 of them have been already introduced. “Each extra train means a town, village or city better connected. A person able to get to a new job. A business linked to a new market. In many cases, much faster than before,” added Paul Plummer.