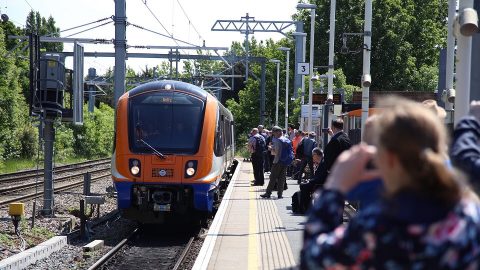 Two brand new Aventra electric trains were entered into service on the London Overground network, suburban rail service in the British capital and its outskirts. The passengers can use the vehicles on the Gospel Oak – Barking route. In general, the London Overground lines should receive 54 Aventra units by the end of 2021.

The new four-car electric trains made the first trip on London Overground line on 23 May. More six vehicles of this type will be added on the Gospel Oak – Barking route by autumn. In September the Aventra units will provide the free travels on this line. The action was funded by Bombardier Transportation, a manufacturer of the supplied trains, in order to compensate for the one-year delivery delay.

Other 48 Aventra vehicles will serve four other lines: between the Watford Junction and Euston station, as well from Liverpool Street station to Cheshunt, Chingford and Enfield Town stations. Also, the trains will be used on the extension of the Gospel Oak – Barking route to Barking Riverside station. It is expected to be accomplished in 2021.

Bombardier Transportation has developed the Aventra electric trains especially for the British market as a successor to the Electrostar family. This type is producing at Derby Litchurch Lane Works, the UK’s subsidiary of Bombardier Transportation. The Aventra trains were entered into service on the British market in June 2017. The TfL Rail route between London Liverpool Street and Shenfield became their first regular service.

Bombardier Transportation has already concluded several contracts to supply 412 Aventra trains in different composition – from three to ten cars. The rail operators Greater Anglia and South Western Railway (SWR) plan to introduce this type on their routes this year. West Midlands Trains (WMT) is scheduled to do this in 2020-2021 and c2c, a subsidiary of Trenitalia, in 2021. Bombardier Transportation is also regarding the option to convert Aventra electric trains into hybrid ones with battery power.