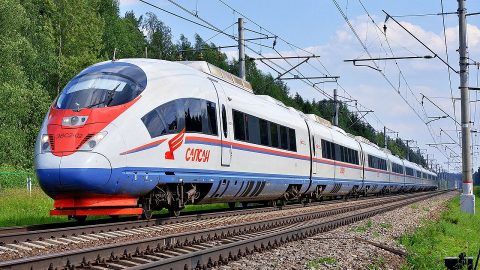 Siemens Mobility together with its Russian partner Sinara Group has concluded an agreement for the delivery of 13 high-speed Sapsan trains to Russian Railways. The vehicles are scheduled to supply from September 2022 till July 2023. The parties also signed the deal for the rolling stock maintenance during the 30-year period.

Sapsan ten-car trains will run on two high-speed lines from Moscow to both Saint Petersburg and Nizhny Novgorod. New vehicles will allow Russian Railways (RZD) to increase the traffic frequency on the Moscow – Saint Petersburg route from 15 to 18 trains (nine of them will be coupled) per day in each direction and from one to three trains per day in each direction on the Moscow – Nizhny Novgorod route. The supply costs 513.5 million Euros.

The second deal provides the maintenance of Sapsan trainsets during their lifespan (30 years). This service is valued at 583.1 million Euros. Siemens Mobility will maintain the trains on the facilities of Ural Locomotives, its joint venture with Sinara Group based in the Russia city of Yekaterinburg. Currently, the enterprise produces and maintains the Lastochka trains that were developed on the basis of the Siemens Desiro train platform.

Besides the maintenance, Siemens Mobility and Sinara Group will develop a joint engineering centre in Russia. It will be focused on the engineering, consulting, design services, development of the design, operational and maintenance documentation for developing and producing an innovative rolling stock in Russia, including the high-speed trains being capable to run at a speed of up to 400 kilometres per hour. With the establishing a new centre, the parties will join forces in creating new types of high-speed trains. The facility will also allow Russian Railways to instruct its staff for the maintenance of high-speed vehicles.

Russian Railways operates the Sapsan fleet since 2009. The company has 16 ten-car trains of this type. They were manufactured in 2007-2014 at the Siemens facility in Krefeld, Germany. This type is based on the Siemens Velaro platform of high-speed trains. The name ‘Sapsan’ means Peregrine Falcon in Russian. These vehicles were adopted to the Russian gauge (1,520 millimetres) and extreme temperatures (ranging from -40 to +40 degrees Celsius). The units are equipped with Russia’s national train control system and can transport around 550 passengers.

“The fact that RZD is relying on Siemens Mobility for the third time in expanding its high-speed fleet reflects the strong performance of our Velaro platform, which increases value sustainably over the entire lifecycle, enhances passenger experience and optimizes availability. The Velaro has already proven its reliability in Russia after covering more than 50 million kilometres since 2009,” said Sabrina Soussan, CEO of Siemens Mobility.