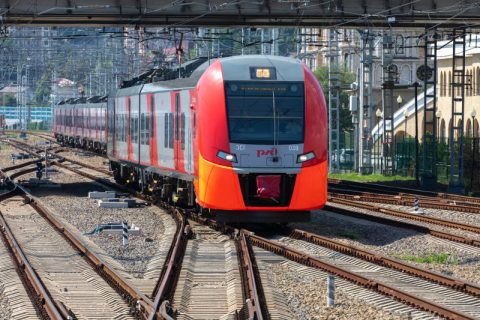 On November 1, the five-car electric multiple units (EMU) train made the first trips in Perm Krai – from Kungur and Vereshchagino to Perm, the centre of the region. On this first day, the trains carried circa 500 passengers in both directions. “Comfortable rolling stock, convenient timetable and the optimal fare attract people,” said the Director of Sverdlovsk Railway (regional branch of PJSC Russian Railways) Aleksei Mironov about the service.

The basic ticket costs 180 Rubles (circa 2.4 Euros) from Perm to Kungur, and 208 Rubles (circa 2.8 Euros) from Perm to Vereshchagino. The Lastochka trains are now only running during rush hours; in the morning and in the evening. However, the local authorities intend to increase the number of trips. “Now we are discussing the usage of the EMUs at noon, not only in the morning and evening peak hours,” noted the governor of Perm Krai Maksim Reshetnikov.

The Lastochka trains in Russia

The Siemens-designed Lastochka trains were developed on the basis of the Siemens Desiro family of diesel and electric multiple units running in several European countries, as well as in the USA, Israel, and Malaysia. In Russia, these trains made their first trips on January 2013 on the routes from Saint-Petersburg to both Veliky Novgorod and Bologoye. Currently, Russian Railways operates more than 170 units of this model. The Lastochka trains serves commuters as an intercity to/from large Russian cities such as Moscow, Saint-Petersburg, Kaliningrad, Krasnodar, Rostov-na-Donu, Yekaterinburg, etc. as well as on urban routes in Moscow.

The first eighteen trains were assembled on the Siemens production facility in Krefeld, Germany. In 2013, Siemens  Mobility together with Sunara Group established Ural Locomotives, a joint venture to manufacture passenger trains and locomotives. Thus, the production was localised in Russia. The initial level of localisation was 62 per cent, Ural Locomotives intends to increase it to 80 per cent. The manufacturer is expected to produce 240 Lastochka EMUs by 2021.