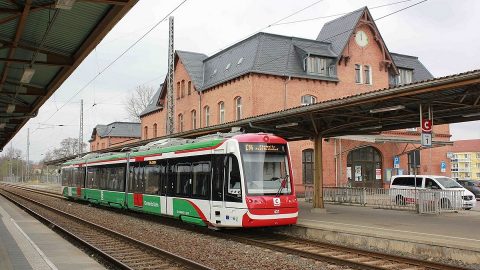 Swiss rolling stock manufacturer Stadler prepares to start the delivery of the first CityLink tram-trains to Wales. The three-car light rail vehicles will use both electric energy and battery power. 35 tram-trains will serve the cross-city and commuter lines in the capital of Wales, Cardiff, and its surroundings.

“It’s really exciting to know that Cardiff will see the return of a tram operation for the first time in over 70 years,” said Kevin Thomas, CEO of Transport for Wales Rail Services (TfW Rail). The CityLink tram-trains will also serve the commuter routes from Cardiff to Treherbert, Aberdare and Merthyr Tydfil. The bi-mode vehicles will start regular service from 2022 and will be operated by TfW Rail, a Welsh subsidiary of Keolis.

Besides the battery-powered tram-trains, Stadler will also supply 36 innovative Flirt trains to serve the planning South Wales Metro routes. The batch is divided into two groups. 24 tri-mode units (7 three-car and 17 four-car) will be capable to use overhead electric wires, diesel and battery power. The remaining 11 four-car trains will be diesel-operated. “The tri-modes being built by Stadler will offer an efficient and cost-effective electric drive and battery operation. 2022 can’t come soon enough for us or our passengers,” noted Kevin Thomas.

Cardiff will be the third city in the UK to operate the Stadler trams. 12 Variobahn units serve the Croydon Tramlink in London since 2012. The Swiss producer has delivered 7 CityLink vehicles in 2015-2016 to Sheffield. Moreover, Greater Anglia ordered 58 Flirt trains. The rail operator received the first unit on 28 February.

Stadler will supply 52 Class 777 electric multiple units for Merseyrail to be operated on the Liverpool commuter services. The manufacturer has also concluded a contract to deliver 17 trains for Glasgow Subway. The Class 68 and 88 locomotives produced by Stadler are used by the British passenger and freight operators.