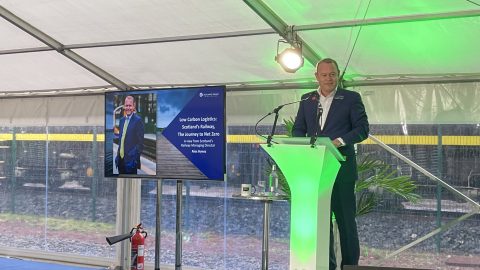 Scotland’s Railway managing director Alex Hynes calls on the transport sector to reduce emissions in memory of the victims of the Stonehaven rail crash last year, where climate change played a role. Scotland had been subject to an extraordinarily severe storm, and the passenger train derailed after the train ran into a landslip.

With the Stonehaven crash in August last year, Scotland was reminded of the “devastating impact of climate change”, the boss of Scotland’s Railway, the partnership between Abellio ScotRail and Network Rail Scotland, said at the low carbon logistics event, writes Scottish Business Insider. Three people lost their lives in the crash. Hynes said there is a clear link with climate change, noting that the derailment was a result of extreme rainfall, and more extreme weather is expected with rising temperatures.

“We owe it to the memories of Brett, Donald and Christopher to decarbonise our railway and rise to the challenge of the generation and learn how to run a safe and resilient railway in the face of climate change. Climate change is impacting our services right now; the time for action is not tomorrow, it’s today”, said Hynes.

The Scottish government has an action plan to decarbonise domestic passenger services by 2035, five years ahead of the UK target. 40.7 per cent of single track rail kilometres are currently electrified, and this accounts for 76 per cent of all passenger journeys. Scotland aims to electrify, on average, 130 single track kilometres per year. Sections of route could potentially include discontinuous electrification, where dual-mode trains could jump in. For other routes, alternative tractions methods will be used, such as battery or hydrogen trains.

Reportedly, Hynes hinted that plans could be released in the coming months which confirm the entire electrification of the Borders Railway. This line connects the city of Edinburgh with Galashiels and Tweedbank near the border with England. He said that the line was designed in a manner that it was ready to be electrified.

It is up to all sectors to speed up decarbonisation to fight climate change, but anyhow the weather is expected to get more extreme, even if the world manages to keep the temperature rise at 1.5 degrees. British infrastructure manager Network Rail also knows this, and takes measures to prevent for example landslips, which caused the Stonehaven crash.

To reduce the risks, embankments and cuttings can be shored up using a variety of engineering approaches, from sheet piling, to soil nails and rock anchors. Network Rail recently finished such a landslip prevention project in Hastings in the South-East England. Thousands of sensors are also set up on routes prone to landslips. They can detect movement, an early sign of a potential landslip.