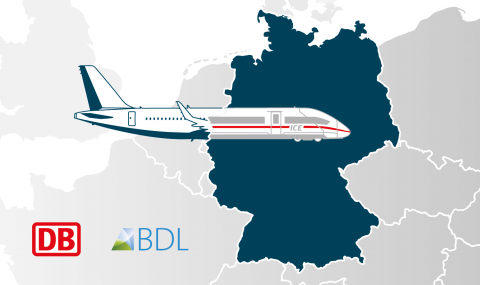 The Association of the German Aviation Industry (BDL) and Deutsche Bahn (DB) are launching a joint action plan to bring about a shift from domestic flights to the railways. In the declaration signed today in Berlin, the two parties announce that they will be taking measures to improve the connectivity between the two modes of transport and offering faster connections between major cities.

The aviation industry and Deutsche Bahn see the potential that 20 percent of people that currently travel by plane within Germany will choose the train instead. In the following years, the partners want to tap into this potential. With attractive offers and ongoing infrastructure expansion, BDL and DB want to attract around 4.3 million passengers to switch to the train.

In 2019, the aviation industry recorded around 23 million travellers. 8 million of these were passengers on feeder traffic to hub airports, and 15 million on purely domestic trips. As a result, the share of domestic air traffic in Germany’s CO2 emissions could potentially be reduced by a sixth, according to DB.

Peter Gerber, President of the BDL Air Transport Association: “We want to connect the modes of transport in such a way that the customer-friendliness of the mobility offer for travellers is further improved. With a growing range of rail services and optimised connections, more people will switch to rail. This is an important building block for climate protection in the transport sector.”

The first step in the action plan is to expand the range of trains connecting to international flights. The Lufthansa Express Rail service will expand to include further domestic German routes. Wherever passengers accept the offer and increasingly switch to rail, the aviation industry can consequently reduce flight frequencies and also discontinue connections, such as on the Cologne-Frankfurt connection or most recently on the Berlin-Nuremberg route. The fast rail connections are primarily intended to shift feeder flights to large hubs and individual traffic to the airport by rail.

Easier transfer between flights and trains is the second step in the plan. Optimised routing and signage should make it easier for travellers to switch between planes and trains. The change at the airport between the train and the airport security area is to be improved for intermodal customers. Baggage handling should also become easier. Frankfurt / Main Airport is the starting point for this.

Third and perhaps most important in the plan, are faster train connections between major cities. Together with DB, the German government is expanding the federal rail routes for the implementation of the Germany cycle in stages. This enables shorter travel times and nationwide coordinated connecting trains. The action plan takes into account high-performance, attractive rail connections, especially between the metropolises, and better transfer connections in local transport. In this way, the need for domestic flights on more and more routes can be made redundant.

“With the timetable change from December, we will be offering more alternatives to short-haul flights with new, super-fast Sprinter connection”, says Berthold Huber, DB Board Member for Passenger Transport. “In addition, we are connecting the airports even more closely to the railways. The latest expansion of our partnership with Lufthansa is ground breaking in this regard.”

Train to the airport

In order to replace feeder flights and to avoid car journeys to the airports, the connection of the large hubs to the railways is a key factor. Five airports are already linked to long-distance and local transport (Berlin, Düsseldorf, Frankfurt, Cologne / Bonn and Leipzig / Halle). Furthermore, seven airports are linked to to local train services (Dresden, Friedrichshafen, Hamburg, Hanover, Lübeck, Munich and Stuttgart). Stuttgart Airport will be connected to long-distance traffic from December 2025. The State of Bavaria is examining options for a more extensive connection to Munich Airport in a feasibility study. The BDL considers this to be necessary to strengthen intermodality.