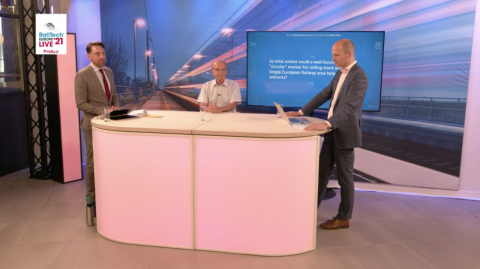 ‘Track access charges are too high for new entrants in rail’

In recent decades, huge investments were done in Europe for the construction of high-speed lines. National networks of thousands of kilometers of track have been built. “Now the only thing left to do is to integrate those networks at European level, to harmonise legislation and regulations and to reduce the track access charges”, says Andrea Giuricin, Professor in Transport Economics at University Milano Bicocca in Italy.

Andrea Giuricin was involved in the creation of the first private railway company to be admitted to the high-speed line in Italy in 2011. State-owned company Trenitalia faced competition for the first time with the arrival of Italo NTV. In the case of Italy, competition on the high-speed line has led to an increase in the number of travellers, a decrease in the price of train tickets and a better service for the traveller.

According to Giuricin, who gave a presentation at the online trade fair RailTech Europe, the price of a train ticket on the Rome-Milan route decreased on average by 35 to 40 percent. The number of travellers grew with 120 percent. In 2018, the last reference date before the corona crisis, the fast train took 80 percent of the travellers, the plane only 14 percent and car and bus 6 percent. Giuricin attributes this shift entirely to the advent of market forces on this rail route.

The fact that competition in Italy works on domestic routes does not automatically mean that it is also a guaranteed success formula on international rail connections. Brussels also has an influence on this, say Guiricin, Arriën Kruyt of the European Passengers Federation and Nick Brooks of AllRail, the organisation that represents the interests of new entrants on the European rail market. The trio took part in a panel discussion about competition in the market for cross-border train connections.

“Despite major investments in rail infrastructure, Europe has hardly seen any growth since 1995, the market share fluctuates around 8 percent of all travellers in Europe.” Technical regulation is the main barrier, according to Giuricin. “Even though we have an open market, there are hardly any new entrants due to the high barrier. There is not really a Single European Railway Area yet. If we don’t get real competition at European level, you won’t see the benefits of market forces.”

Competition is an important incentive for carriers to cut costs. It can lead to 40 or even 50 percent lower costs, as has been shown on the Italian high-speed line. But they themselves have no influence on the largest cost item and that is the user charge for the infrastructure.

This is also an eyesore for Arriën Kruyt. “I think it’s fine to support Eurostar financially to survive the current crisis, but for the longer term, something really needs to be done about the insanely high access charges. They now pay for the use of the channel tunnel and for the British, French, Belgian and Dutch railways. If you want competition on international routes such as the one between London and Amsterdam, then governments should first make sure that it is profitable to run trains.”

Giuricin advocates only charging the direct costs for the use of the rail to carriers. “Now they contribute to the investments in new track and other costs that governments and infrastructure managers incur. I think these are costs with a political connotation. If you want a modal shift and want to stimulate sustainable mobility, as a government you have to make the right choice between investing in rail or roads and airports.”

Moderator Rogier Elshout rightly remarks that the construction and maintenance of railway lines is very expensive, which has to be paid for. This cannot be ruled out when lowering the user charge. Nick Brooks adds that the lowering of the track access charges actually means that more carriers will use the railways and that the revenues from the access charges at the bottom of the line could be the same or higher. In doing so, he may be ignoring the fact that more intensive use of the track leads to more maintenance.

A poll among the participants of the digital congress yields a majority in favour of lowering the track access charges. 25 percent voted in favour of this measure to create a level playing field. 25 percent is in favour of combating discrimination in the allocation of rail capacity. 21 percent want an independent platform for selling tickets. Only 11 percent think the same laws and regulations are important throughout Europe and 5 percent want strict rules on state aid and unfair competition.