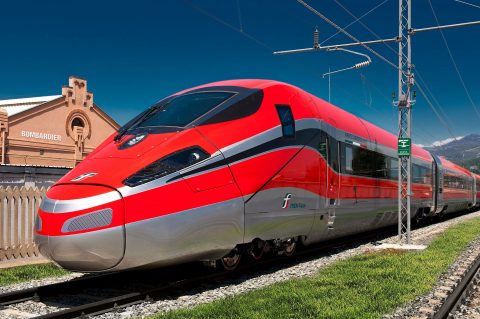 European Commissioner: legislation in the making for tripling high-speed trains

The European Commission will formulate EU legislation for “concrete actions” to double rail freight transport and triple the number of high-speed train services by 2050. In the meantime, trials are underway with a European train timetable and a language tool to remove the language barrier between different EU countries. Herald Ruijters, director of Investments, Innovation and Sustainable Transport of the European Directorate for Transport (DG Move), spoke about this last week at RailTech Europe.

The International Rail Passenger Platform (IRP), in which European member states and the European Commission work together, will in the coming period further develop plans for a network of international train connections. There will also be worked on the implementation of the ‘Time Table Redesign’, the setting of a European timetable, a European passenger information and ticketing system. In addition, there will be at least fifteen pilot projects for international passenger transport by rail. A report by the IRP that will be published this summer forms the basis for a European policy agenda.

Ruijters points out that a pilot with the Time Table Redesign is currently already underway and that a trial will be carried out this year with a translation tool that aims to break through the language barrier in international rail transport and improve interoperability. “The rail sector is a place where these kinds of developments can be implemented relatively easily because of ERTMS and other digitisation projects we are working on.”

According to Ruijters, the new EU legislation not only introduces new actions to promote international rail transport, but also “strengthens and more resolute” previous EU legislation. He points out that EU regulations such as for the development of a Trans-European Rail Network and the Fourth Railway Package have meant that important steps have already been taken in recent years.

Although not all EU countries have yet taken steps with the introduction of the various EU railway packages, Ruijters states that “small steps, but stable steps forward” are being made. When asked why kilometers of track are being built in China in a very short time and it takes much longer in Europe, he answers that “this is what democracy is in Europe”. “We’re not doing it the” Chinese way “of building thousands of miles of track in citizens’ backyards. We have a lot of regulations that protect citizens and that ensure that things are done correctly when building infrastructure.”

As an example of a good implementation of the Fourth Railway Package, he points out that a new, private railway company was set up in Portugal at the end of last month, connecting the cities of Braga, Porto, Aveiro, Coimbra, Lisbon and Faro. The operator, named B-rail, is a subsidiary of transport company Barraqueiro. “We have more and more rail operators in Europe competing with each other. This will lower prices and improve service.”

At the same time, he indicates that there is “still a long way to go”. “There are still challenges to face in terms of infrastructure and interoperability. It is important that the Fourth Railway Package is fully implemented by the EU Member States.”

In the meantime, according to him, the European Union Railway Agency is working on ERA to further reduce the multitude of operational regulations. “For example, we had more than three thousand regulations for the admission of railway equipment. We are reducing this further to facilitate the train admission process. ” Since 31 October last year, rail operators only have to submit one application via ERA’s One-Stop Shop IT tool (OSS) for the admission of vehicle permits and safety certificates.

He points out that the introduction of ERTMS will also ensure further harmonisation of regulations and higher interoperability. “There are more and more EU member states that are going to convert their entire national rail network to an ERTMS network. This change has started in recent years and I expect that ERTMS delivery will determine the future of rail in Europe in the next five to ten years.”