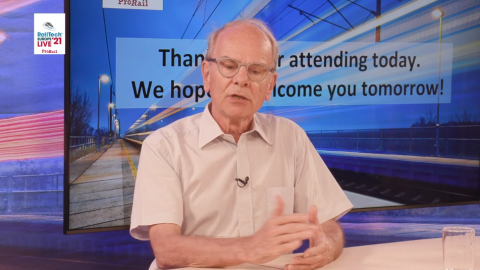 “A merger between Eurostar and Thalys will give the combined company a monopoly position on the railways. As a result, the prices of the train tickets will increase”, says Arriën Kruyt of the European Passengers’ Federation (EPF). The EPF has objected to the impending merger. Kruyt took part in a panel discussion on competition in railways during RailTech Europe last week.

Due to the financial consequences of the corona crisis, Thalys has decided to postpone the merger with Eurostar for the time being. According to Kruyt, the European Passengers’ Federation is against the merger because it is known that when rail carriers compete with each other, “prices will go down and service will go up”. That is something Eurostar has shown in recent years, including on the connection between Amsterdam and London.

“The only bit of competition in the Netherlands in the field of international passenger transport by rail is on the connection between the Netherlands and Belgium. There we have the expensive Thalys train, the cheaper Benelux train and the Eurostar.”

Due to the corona crisis, Eurostar has significantly reduced the number of train services, but when the offer was somewhat higher, Kruyt was very pleased with the choice of three options. “From the passenger’s point of view, this is perfect.” He points out that when traveling from the Netherlands to Paris, the traveller can only choose Thalys and get the short straw. Therefore, keeping the competition between Thalys and Eurostar is the best option, according to him.

The French SNCF – which is the largest shareholder of both Eurostar and Thalys – announced its intention to merge the companies at the end of 2019. French and British competition organisations are reported to have yet to address this issue. SNCF General Manager Bertrand Gosselin indicated earlier that both carriers must first get their financing in order. Eurostar has been hit hard by the corona crisis. According to SNCF, financial support from the government is needed within a month to keep the carrier connecting Europe to the UK afloat.

Thalys is also in dire straits due to the corona pandemic and is in talks with several banks to raise 100 million euros in external financing. Thalys turnover in 2020, at over 165 million euros, was no less than 70 percent lower than a year earlier.

Eurostar is 55 percent owned by SNCF, 5 percent by the Belgian NMBS and 40 percent by the private parties Caisse de Dépôt et Placement du Québec (CDPQ) and Hermes Infrastructure. The British state sold its 40 percent stake to CDPQ and Hermes Infrastructure in May 2015. “In England they hope that the French state will now contribute money to prevent Eurostar from falling”, said Kruyt.

Thalys’ shareholders are SNCF with a 70 percent stake and NMBS with 30 percent of the shares. Dutch Railways NS is a strategic partner and has no share in the company.

In addition to the consequences of the number of train passengers due to the corona pandemic, Eurostar is faced with a high fee for the tracks in the Channel Tunnel between Calais and Dover, says Kruyt. “Eurostar pays 16 euros per passenger. That is killing for international rail transport. Some European countries have opted to reduce the user charge for the railway. This must be arranged and coordinated internationally.”

Kruyt takes into account the possibility that Eurostar will go bankrupt. “In case of bankruptcy, another party will talk to the trustee and possibly take over the equipment”, he says.