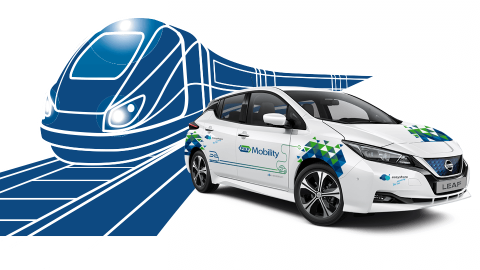 For many years, the Polish state-owned railway holding PKP S.A. and its subsidiaries have been almost entirely focusing on the train services. The other modes of transport were mostly represented by rail replacement buses. This year the railway holding has started to move towards multimodality by launching new options for the customers.

PKP S.A. consists of about 10 subsidiaries. Most of them are dedicated to various aspects of railway operations, from track maintenance to providing passenger information at the train stations. As a result, the Polish state-owned holding is highly focused on one mode of transport. In contrast to this, the European railway state-owned groups such as Deutsche Bahn or Austrian Federal Railways (ÖBB) offer other mobilities to their customers. Among other things, the mentioned companies have their own bus divisions – DB IC Bus and ÖBB Intercitybus respectively. PKP S.A. seems to gradually follow this way by adding or planning to add new modes of transport to its services.

Several years ago PKP Intercity, a Polish operator of long-distance and high-speed trains, started to replace some loss-making train connections with bus services. It was a temporary measure in order to reduce costs and to save the transport communication for the customers. At that time, the railway company even declared its intention to launch the new bus services not linked to the rail links. Time has proven that these plans did not become true and most of the PKP Intercity buses provide rail replacement services during the modernisation works on tracks or in case of emergency.

Meanwhile, the situation is likely to change in the coming period. This year several regional bus companies bankrupted in Poland. Among them were PKS Zamość in Lublin Voivodeship, PKS Częstochowa in Silesia, PKS Chojnów in Lower Silesia. The insolvency of PKS Częstochowa caused many discussions in Poland over the future of the regional bus companies.

PKS is an abbreviation originated from Przedsiębiorstwo Komunikacji Samochodowej that is translated from the Polish as Motor Transport Company. During the socialist period, there was one PKS company, which was a monopolist for bus communication in Poland. In 1990 this giant was divided into 176 smaller companies. Of them, only less than 100 bus operators are still working. To save the remaining PKS bus companies, Poland’s Ministry of State Assets is currently developing the solution for their possible consolidation under the umbrella of PKP S.A. As a result, the Polish railways could receive its own Arriva-like bus company.

In January PKP S.A. presented a new package of services branded as PKP Mobility. It includes carsharing and bike rental. Both options are focused on electric vehicles. To provide the carsharing service at the train stations, the railway holding joined forces with Easyshare, the Polish carsharing company. The pilot project was launched at Gdynia Główna railway station in mid-August. Easyshare placed 10 Nissan Leaf electric cars close to the station building. A vehicle could be rented for 20 zlotys (around 4.5 euros) per hour if a customer plans to use it less than 4 hours or for 6 zlotys (around 1.4 euros) per hour if the renting period will be longer. At the beginning of September, two more railway stations, Gdańsk Główny and Gdańsk Oliwa, were equipped with the carsharing points.

As for bike rental, it was arranged by PKP Telkol, a telecommunication subsidiary of PKP S.A., and TrybEco, a Polish start-up. This service is dedicated to electric bikes. The first two rental points were opened this summer on the Hel Peninsula, which is famous for its seaside resorts. 10 electric bikes were deployed at Władysławowo railway station, another 10 two-wheelers at Hel station. There is a picturesque bike path between these points and the customers are able to travel this route with little effort and without producing CO2 emissions.