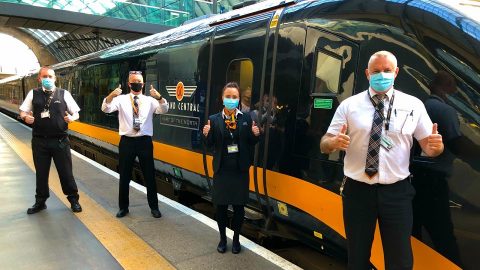 Britain’s non-franchised railway companies were on the verge of extinction for four months. Now the situation has changed for the better. While Hull Trains is just returning on tracks, Grand Central is adding new connections. Heathrow Express, in its turn, is offering new options for the passengers.

Grand Central, the York-based operator owned by Arriva UK Trains, relaunched its connections almost a month ago, on 26 July, after four months of suspension. Currently, the company is working on increasing its train traffic. On Monday, 24 August, Grand Central launched the fourth return service between Sunderland and London King’s Cross. It will be available for the customers from Mondays to Saturdays.

At the same time, the British operator is considering the additional services on its another route, between Bradford and London King’s Cross (via Doncaster). “Increasing the number of trains we’re running means we’re giving customers more choice on when to travel and we are helping social distancing across the whole network,” Grand Central managing director Richard McClean said.

Hull Trains suspended all its connections at the end of March. The open-access operator, which is owned by FirstGroup, was in hibernation for almost five months. It relaunched its trains only on Friday, 21 August. “Today’s the day! We’re back on track running direct services to London. “Look out for the green, yellow and red seat labels onboard to sit at a safe distance from others and don’t forget your face coverings. We look forward to welcoming you onboard,” the company announced its returning.

Heathrow Express, which operates train services between Heathrow Airport and London Paddington station, did not suspend its operations but it reduced the schedule. Since 22 March, the company’s trains are running every 30 minutes instead of every 15 minutes as it was before.

Trying to keep its connections and to attract more passengers, the operator is experimenting with ticketing. Currently, the passengers are able to purchase tickets for Heathrow Express trains only by using digital distribution channels: the company’s website, mobile app or contactless payments in the terminals. Starting from 6 September, the airport rail link operator will lift peak and off-peak restrictions. This will allow customers with single tickets to travel at any time of day.