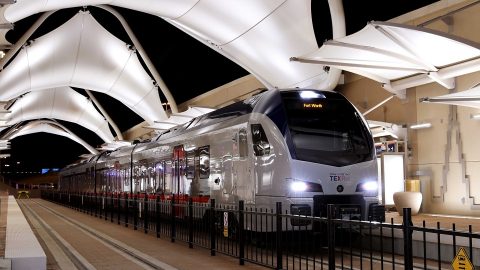 US public transportation agency Trinity Metro launched the 43-kilometre TEXRail commuter service between Dallas/Fort Worth International airport and Fort Worth downtown. The first train departed on 10 January. It is the first airport rail service in Texas that facilitates ground transportation between Dallas–Fort Worth metropolitan area and the US fourth busiest airport.

The train departs from the Dallas/Fort Worth airport station, close to Terminal B. It makes seven stops before arriving at the Fort Worth Texas and Pacific station (T&P Station) in Fort Worth downtown. The travel time between the termini is 52 minutes. The rail link will be free until 1 February. After that, a ticket will cost 2.5 Dollars (circa 2.17 Euros).

The trains run with a frequency of one ride per hour in each direction. The commuter service works almost round-the-clock with some restrictions in the night time. The first train departs T&P Station at 3:30 a.m. and arrives at the airport at 4:17 a.m. The last train leaves the airport at 00:55 a.m. and reaches the Fort Worth downtown at 01:46 a.m. The expected daily passenger traffic is 8 thousand travellers.

The Dallas/Fort Worth airport rail link is served by Flirt trains supplied by Swiss rolling stock producer Stadler. In June 2015, Trinity Metro and Stadler signed an agreement for the delivery of eight four-car diesel multiple units. The trains were delivered in 2017-2018. Each vehicle has two Deutz 520 kW diesel engines and can speed up to 130 kilometres per hour. The Flirt train ordered by Trinity Metro has a total capacity of 488 passengers and a seating capacity of 229 passengers.