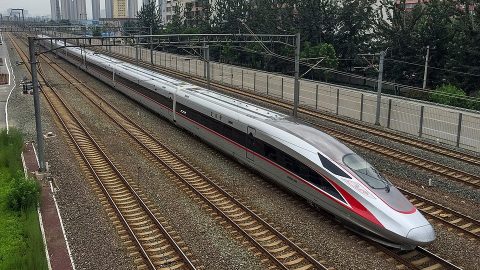 China Railway will launch regular self-driving high-speed trains in 2022. The automated units will serve the line between Beijing and Zhangjiakou, two host cities of the 2022 Winter Olympics. They will be able to operate at a speed of 350 kilometres per hour.

The implementation of automated train operation (ATO) will be provided in two stages. At the initial phase, a driver will remain in the cabin and will control the train during the ride. If something goes wrong, he will interfere and will operate the train manually. The second stage will start ten years later by finally eliminating the train driver.

The ATO system was successfully tested from July to September 2018 on the Beijing-Shenyang line. The self-driving bullet trains ran more than 186 thousand kilometres during 94 days of trial. Earlier, China Railway tested the ATO system on two lines in the Pearl River Delta region of Southern China. The trials were carried out on an older generation of bullet trains at a speed of 200 kilometres per hour.

“An automatic driving system could greatly improve the safety of trains which run on high-speed railways, compared with human drivers who may have sudden health problems or disregard safety precautions while driving”, a railway expert and professor at Shanghai Tongji University Sun Zhang told the Global Times.

For the automated operations, China Railway will use Fuxing bullet trains developed by Bombardier Sifang Transportation, a joint venture of CRRC and Bombardier Transportation. The first Fuxing CR400AF unit was unveiled in June 2015. It reached a maximum speed of 420 kilometres per hour during test rides on the Zhengzhou–Xuzhou high-speed railway in July 2016. The Fuxing trains started to run regularly between Dalian and Harbin in August 2016. In June 2017, they debuted on the Beijing-Shanghai line linking two Chinese major cities in 4.5 hours. The Fuxing units run at a regular speed of 300-350 kilometres per hour.

In September 2018, chairman of France’s SNCF group Guillaume Pepy announced that his company will introduce “semi-autonomous” trains by 2020 and fully-automated ones within five years. The French national operator plans to launch self-driving freight trains by 2021, while the automated passenger service will start in 2023 on the RER network in Paris and its suburbs. The self-driving TGV high-speed trains will run in 2025.