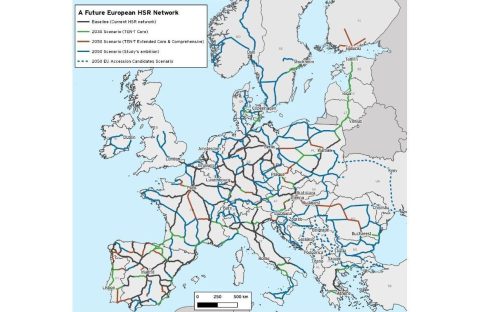 Current high-speed rail (HSR) lines in Europe are like islands, scattered across the continent. But what would a fully interconnected European high-speed network look like? What would it cost, and what benefits would it bring? To answer these questions, Europe’s Rail Joint Undertaking commissioned a study, which results were presented this week.

The vision is clear: a high-speed rail network connecting all European capitals and urban centres with more than 250.000 inhabitants. Such a comprehensive network would mean at least tripling the existing high-speed rail network. “There is already high-speed rail in Europe, but not a network, there are islands, and many cities, mainly in Eastern Europe, do not benefit from high-speed rail”, says Carlo Borghini, Executive Director of Europe’s Rail Joint Undertaking and an important driver of the study.

Europe’s Rail commissioned the study by Ernst and Young (EY) in cooperation with Università Bocconi, which investigated three network scenarios for high-speed rail in Europe, benefiting from data made available by CER, ALLRAIL and UNIFE. The envisionaged network would require some 550 billion euros in investments, calculated EY, but would bring more net positive benefits to society: in the range of 750 billion by 2070.

Member of European Parliament (MEP) Dorien Rookmaker: “We have four big countries in Europe: Germany, France, Spain and Italy. Nationally, they have a good high-speed rail network But now we need connections to get smaller countries connected to HSR, as well as countries in Eastern Europe. As a MEP, Rookmaker has been advocating a fully interconnected European high-speed rail network financed revenues of the Emission Trading System (ETS), managed by a non-political EU body.

Without new investment in high-speed rail however, demand and the modal share of HSR are expected to increase only slowly and will leave the EU’s official targets of doubling high-speed rail by 2030 and tripling it by 2050 unachieved, according to the report.

In the map above, various versions of the high-speed network are shown. The image on the left part of the slider shows the current HSR lines in grey, and the planned Trans-European Transport Network (TEN-T) Core Network, which is targeted for completion by 2030. The right side shows the envisioned interconnected HSR network connecting all of Europe, with the already planned high-speed lines to be finalised after 2030 in brown, and the needed additional high-speed lines envisaged by the study to fill the gaps and make a comprehensive pan European connecting all major EU cities in blue.

The dotted blue lines show the extension of high-speed lines to future EU member states that are currently candidate for joining the Union. These include Ukraine, Moldova and the Western Balkans like Albania, Bosnia and Hercegovina, Kosovo, North Macedonia, Montenegro and Serbia, as well as Turkey. In this scenario, a total of 4.300 kilometres of track has to be constructed, and an additional 40 million persons would be connected to the European HSR network.

In the 2050 scenario, all new lines will only be constructed as dedicated HSR lines with speeds of 250 kilometres per hour with the associated construction costs, although some lines could also be planned as upgrade of current lines in reality. The assumed costs used are 16.5 million euros per kilometre.

The primary methodological component of the study’s market assessment is the demand/shock model. It estimates the demand for HSR and the competing modes of transport year by year until 2070, taking into account population growth, GDP and previous demand trends. Then, 10 ‘shocks’ are applied on different forecasted dates. These shocks simulate possible and measurable future developments which may affect demand for transportation.

These are for example the construction of more high-speed rail infrastructure, fuel price increases, a flight tax or ban on short haul flights which is currently discussed in some countries, and open access competition between rail operators on long-distance services. These would all increase the demand for high-speed rail, but the shock of an increase in competition in long-distance bus operators would lower the demand for HSR. The outcomes of these shocks and effect on the demand are all based on existing scientific research. The shocks identified which will increase demand for HSR the most are competition among operators in the high-speed rail market, the deployment of railway technology of the Shift2Rail (now Europe’s Rail) programme, and the construction of new HSR infrastructure.

It is important to note that no shocks on technological improvements of other modes are included, mentions the report. These notably are autonomous driving for passenger cars and clean fuel for aviation, recognises the study, but both technologies are at this point too immature for any estimations of their effect. Electric cars are taken into account, however.

The comprehensive HSR network connecting all centres in Europe with more than 250.000, together with full adoption of policies and deployment of technologies would result in HSR becoming the dominant mode with a 54 per cent modal share in 2070, it is estimated in the study. This takes into account all shocks the study identified. The study has deemed any iteration of a Hyperloop too unrealistic currently to be considered.

At the presentation of the study, Alberto Mazzola, Executive Director of CER pointed out that the benefits are clear, but the political will to realise such a network is another thing: “We now need the confidence of countries, and political decision makers. As CER we like the revision of TEN-T, except on one point”, says Mazzola. “The Commission is too shy. The benefit of high-speed rail is clear, we need now to win the minds of ministers, the members of the European Parliament already seem convinced. We want to see more high-speed rail in the TEN-T network, the time is now.”

Looking ahead to 2040 to 2050, it will take six European Commissions, and different EU parliaments, notes Mazolla. Therefore, commitment is important. Commenting on the fact that recently, the Swedish government dropped plans for two high-speed rail lines, he urges them to reconsider this. “But when seeing the developments with high-speed rail in countries like Poland, I think the Swedish government will be convinced.” Poland has large plans for new high-speed lines, as well as Czech Republic and the Baltics, which would already close some of the gaps in HSR in Eastern Europe.

The head of CER also emphasises that this vision is not just one of the large state-owned rail operators in Europe, which CER represents. “It is not just the incumbent proposing this, but all of the sector supports it, including independent rail operators.” Indeed, representing independent operators and new entrants to the rail market, Secretary General of ALLRAIL Nick Brooks comments: “We want high-speed rail to become a product for the masses, and majorly reduce the use of private cars.” For that, high-speed rail needs to be affordable and attractive, with frequent departments, he stresses.

To make the HSR network become a reality and a success, interoperable high-speed rail through technological developments is also of great importance, says Philippe Citroen of UNIFE, which represents the European rail supply industry. “To ensure game changing technology, R&D is very important. Also the role of the ERA (European Union Agency of Railways) will be especially important, for example in the reduction of national rules.” Answering a question regarding the amount of new high-speed rail vehicles that would be needed to run operations on such a network during the presentation of the report, he assures that the European supply industry could handle it, and highlights the opportunities for jobs, as well as that it is important to be “the best in high-speed rail’ in Europe.

Citroen also calls for a level playing field among transport modes. “The Fit for 55 package (the set of proposals to revise EU legislation to reach the climate targets, red.) goes in the right direction, if member states vote for it. But there also needs to be financing for projects, the money available in the CEF (Connecting Europe Facility) is not a lot of money, I hope there is more ambition on these points.”  As one of the European Parliament members striving for the realisation of a truly interconnected high-speed rail network, Dorien Rookmaker stresses that this report shows the benefits would be much higher than the costs: “This is an economically viable plan, so it is a question of investment and of finance. This could be a profit centre instead of a cost centre, not only in economic terms but also prosperity and integration”, she concludes.

A pity it is, currently TEN-T is short of resiliency. Thus recently, Sweden suddenly scrapped our high speed plans – just some months earier formally approved by parliament… (Surely temporary, but still a stop, based upon rising, costs – related infrastructure.)
Anyhow, Industry now urgently has to provide for Shift, to “The New Old Railway”, a safely calculable, with safely low and limited forces imposed.
(“RCF”, squats/studs, cracks and broken rails, neither is optimal, nor sustainable…)

It is interesting that when talking about railways there are many negative reactions. Almost no one complains about highways. Interesting. apparently, the costs and justification of the investment are important only for the railways. As you said, pity.