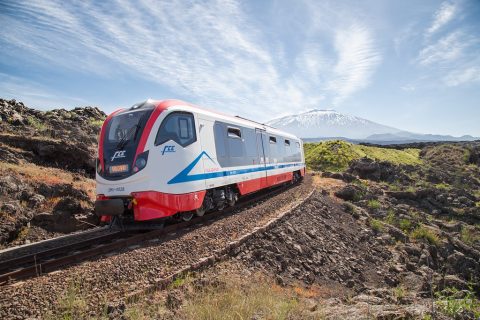 Published on 17-01-2023 at 13:35
Vulcano diesel train on Sicily's Circumetnea Railway, which will be replaced by hydrogen trains NEWAG

Back in 2020, Ferrovie Nord Milano, Alstom and energy producer Snam signed an agreement for the use of hydrogen trains on the railway network in Lombardy for the Brescia-Iseo-Edolo railway line. Since that time, many more developments in the area of hydrogen trains have happened in Italy, as well as some in battery trains.

On the Italian island of Sardinia, the Sardinian Regional Transport Company (ARST) published a tender in December 2022 for the supply of 3 hydrogen traction units with the option of 5 additional units, for the Sardinian capital Cagliari. The trains will run on the 950 mm gauge railway lines of ARST. The tender has an estimated value of 111,5 million euros, and also has an option for full service maintenance services of the rolling stock and spare parts. The project is partly funded by Italy’s National Investment Plan complementary to the National Recovery and Resilience Plan (PNRR) to recover after the coronavirus pandemic. The trains, as well as the other hydrogen trains in this article, refer to hydrogen fuel cell trains, which run on electric traction, powered by an on-board hydrogen fuel cell which converts the fuel to electric power.

In the Calabria region in South-East Italy, Ferrovie Della Calabria published a tender for the supply of hydrogen powered railcars for the capital Catanzaro. It includes the supply of five 5 hydrogen powered railcars, with the option of 3 additional trains and full service option.The tender has an estimated value of 110 million euros, and the trains should be supplied no later than 31 December 2026.

The first five trains are financed by the Decree of the Ministry of Infrastructure and Sustainable Mobility with reference to the intervention programme for the upgrading of regional railway lines and receives EU funding of the recovery and resilience fund after the pandemic. The optional additional trains and service contracts are financed from operating funds and any additional resources that could be made available for experimentation of hydrogen in transport.

On the island of Sicily, Circumetnea Railway has published a tender for the supply, commissioning and full service maintenance of 15 Hydrogen traction units for the 111-kilometre narrow gauge line around Mount Etna. The line currently operates with diesel multiple units diesel by Polish manufacturer Newag, fittingly named ‘Vulcano’. With an estimated value of 267 million euros. The project is receiving funding from the Complementary Fund to Italy’s National Recovery and Resilience Plan, but not from the EU.

Unified Transport Company of Abruzzo (TUA) published a tender for the supply of 10 bimodal electric/battery trains with an estimated value of 112 million euros for the railway in Pescara in the Abruzzo region. The trains should be able to run for 130 kilometres on battery mode for the unelectrified section Sulmona -L’Aquila -Sulmona. The batteries will be recharged by the pantograph both in parking mode and while running. In parking mode, they will be recharged at Sulmona station using the pantograph, and the maximum recharging time should be 45 minutes.

In order for hydrogen train operations to really be ‘zero-emission’, and not only the exhaust vent of the train, the production means are highly relevant, as hydrogen can be produced by burning fossil fuels as well. The Italian government is supporting the increase of hydrogen produced by renewable energy, named ‘green hydrogen’. Last December, the Italian Ministry of the Environment and Energy Security allocated the 500 million euros earmarked for investment of the PNRR for the production of hydrogen in abandoned industrial areas. Tenders have been published for renewable hydrogen production plants in Piedmont , Valle d’Aosta, Puglia, and Sicily, all financed by the PNRR for the “Green Revolution and ecological transition”.

Likewise, sustainability of energy also depends on whether it is produced with renewable resources, like sun, wind and hydropower. In total, the share of renewable energy in Italy’s energy use is 20.4 percent in 2020 according to Eurostat data, just below the EU average of 22.1 percent in that year. In FS Italiane’s Industrial plan until 2031, which rail infrastructure manager RFI is part of, the group set as a goal to have 41 percent renewable energy in this decade.

Want to hear more about shifting from diesel to sustainable rolling stock? Join the Rail Infra Forum on March 14-15 in Rotterdam or online, which makes the link between rolling stock such as hydrogen and battery rolling stock and using biofuel and the necessary infrastructure. Find the programme and speaker overview on the website.

“hydrogen fuel cell […] converts the fuel to electric power”: which means every “hydrogen train” is also a battery train, so “hydrogen-battery train” would be more accurate.
They have a greater range, at the expense of room for a larger hydrogen tank than for a diesel battery hybrid and lugging that extra weight and the fuel cell (or diesel engine) around. Quick-chargers at some stations would save on that wasted (!) energy, price of the train, wear and tear on the line (heayvier train)…

Advantage of hybrid electrification is redundancy, the requested.
(Any vital of society has to prove redundant.)
Remains for infrastructure to prove resilient – and a robust railway is provided!
(The robust transport devices, provide for low risk, high quality supply chains, the handsomely rewarded, by willingly paying clients – and vice versa…)