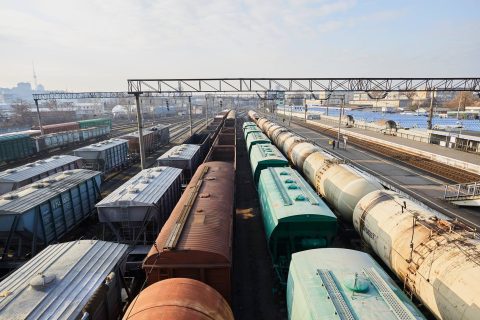 The EU is currently assessing the possibility of extending the standard gauge of the European railway network to Ukraine and Moldova, as part of its effort to better integrate the countries in the European transport area. This is not as straightforward as it sounds. The track gauge of the countries is not only different in width, it is a different philosophy, argues Oleksandr Zavgorodni, Chairman of the Expert Council at the All-Ukrainian Center for Transport Infrastructure Reforms.

Last month, the European Commission and the European Investment Bank (EIB) launched a pre- feasibility study to assess how to better connect the Ukrainian and Moldovan railway networks with the Trans-European Transport Network (TEN-T). The gauge extension is only one part of the assessment, but receives a lot of interest from the industry. The two countries currently have a broad gauge railway network, which is 1520 mm wide. In most European countries, the tracks are 1435 mm wide.

“Railway infrastructure with a 1435mm-wide and 1520mm-wide gauge are built according to different basic principles”, explains Zavgorodnii. “Let’s start with the simplest: the weight and length of the train that is able to run on these tracks. On a 1435mm-wide track, trains are 600 meters long and have an axle load of 20 tons. On the wide gauge track, trains weigh up to 1800 tons and are 840 meters.

“This means that for the transportation of the same volume of cargo, more wagons and locomotives will be needed if the European gauge is used.” This is not only a challenge for Ukrainian Railways, but, even more so, for the many private railway companies in the country, he continues. “They are clearly not ready to move to another infrastructure.”

Nevertheless, a European gauge railway track in certain areas could be needed, such as near freight terminals close to the border, Zavgorodnii acknowledges. The same applies to terminals on the other side of the border, where wide gauge could facilitate efficiency. But, he says, projects that are being considered and discussed will only make sense when building a combined track of both 1435 and 1520 mm. This could be done by laying a parallel track. It is advisable to implement the project only when a compatible or second track is built.”

Not just the gauge

Indeed, a lot of details regarding infrastructure solutions will be determined during subsequent phases of the project development, says the European Investment Bank. “This applies to issues of specific project parameters relating to line length, location, extent of EU gauge and integration within the existing network.”

The subsequent infrastructure investments will ultimately contribute to integration of Ukraine and Moldova in the European transport area by improving connectivity with the EU and increasing the capacity of the new export corridors. The EU wants to see the transport system more resilient to exceptional events, such as the current blockade of Ukrainian ports.

The study is carried out by the EIB technical advisory service JASPERS, which should have its first findings ready by May 2023.

Ucraine might be advised to design a couple of high-speed lines, one of which may extend to Lviv and the polish border, before reconstruction starts and finding rights of way would become more difficult. Changing the gauge is already problematic with Rail Baltica and in Spain. I believe the country would be better off if retaining the existing gauge, except possibly for some sections close to the border, like west of Lviv, to allow direct trains from there to Central Europe with one gauge.

What a nonsense! “On a 1435mm-wide track, trains are 600 meters long and have an axle load of 20 tons. On the wide gauge track, trains weigh up to 1800 tons and are 840 meters.”
That has nothing to do with the gauge; only with the length of sidings or the quality of the track itself. Surprised to hear such a statement.