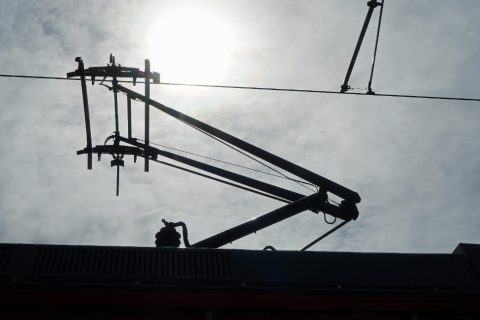 Published on 02-11-2022 at 13:14
Pantograph using electricity from the catenary DB AG / Volker Emersleben

Deutsche Bahn has begun the construction of so-called catenary islands in the federal state of Schleswig-Holstein, where in the near future battery-powered trains will be deployed. These train sets can be charged will running across an area with overhead lines before entering an area without.

By electrifying only sections of track for up to a few kilometres, battery-powered trains can run in areas where you’d normally use dieseltrains. DB estimates that save up to 10 million litres of diesel per year in Schleswig-Holstein alone. Additionally, partial electrification is cheaper and quicker to set up.

The first catenary masts have now been erected near the stations of Kiel and Büchen. By the end of next year, DB wants to also have established islands with overhead lines near Heide, Husum and Tönning. In the meantime, masts will also go up in Bad Oldesloe and between Kiel and Kiel-Hassee. From April 2023 onwards, work will be carried out on the Flensburg-Kiel route.

“Our goal is clear: Deutsche Bahn will be climate-neutral by 2040. We are also helped by creative solutions such as the overhead contact line island for battery-powered trains”, says DB Infrastructure Board Member Berthold Huber.

The future ‘battery network’ (Akkunet) covers 40 percent of the rail traffic in Schleswig-Holstein, including 10.4 million train kilometers and eleven railway lines. The diesel trains used up until now will be phased out. 55 Flirt AKKU battery trains from Stadler were ordered for operation in Schleswig Holstein in 2019 by the public transport authority Nahverkehrsverbund Schleswig-Holstein (NAH.SH), which became the customer for this type of trains from Swiss train builder Stadler.

DB is also eying catenary islands in the federal state of Rhineland-Palatinate and in the Rhine-Ruhr metropolitan region. Preliminary plannings has been concluded in the former and has kicked off in the latter.

I wonder which voltage system will be applied for the “islands”, if actually isolated from the remaining railway grid. Using 50 Hz should be much easier to supply from existing public grid, rather than install inverters at each of the “islands”. In case of 50 Hz/25 kV, it would be international railway standard, whereas 50 Hz/15 kV probably would need less changes as compared to existing German systems.

This figure probably refers to 40% of train-km, but not ofpassenger-km. Also, long-distance trains possibly are not taken into account for the figure.