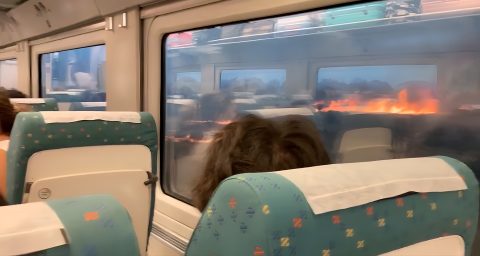 A sweltering heat wave is plaguing European railways, with temperatures surpassing 40 degrees even in Northern Europe. In the south of Europe, continued high temperatures have resulted in fires that also affected train circulation.

The combination of heat and drought means fires continue to wage in Spain, where multiple trains have been cancelled in the past week. On Monday, the Renfe AVE and Alvia train services between Galicia and Madrid were halted. Services resumed on Tuesday, although circulation is still suspended between Zamora and Sanabria stations, where there are transfers via road. Videos circulating online show a train on the section coming to a halt next to the fire.

Initially, Renfe organised an alternative road transport service between the Zamora and Sanabria stations for train passengers who had already departed from their stations of origin. Renfe has activated the appropriate after-sales measures and affected travellers can change or cancel their tickets free of charge.

A regional Euskotren train in Basque country derailed on Monday. While the cause is being investigated, local media reports suggest the incident might be related to the high temperatures. On pictures, it seems the tracks are slightly bent, which could be a result of the heat.

The heat wave has been ongoing in Spain for nearly a week. There have been reports of air conditioning not working, such as on the Renfe high-speed service between Madrid and Barcelona. This left passengers in the sweltering heat on board the trains. Ouigo trains on the same section received complaints online of passengers, too, saying the air conditioning was not working.

The French SNCF first activated its heatwave plan on 12 July, when temperatures began to rise. According to the operator, it is likely that trains will slow down. At the station, staff is mobilised to improve passenger comfort and information, and to distribute bottled water in particular. SNCF keeps extra stocks of so-called “hot period” safety items: priority is given to parts related to the cooling of the main components such as motors and transformers, and pantograph bows and air conditioning equipment. For train preparation, a special system is put in place with a reinforcement of the teams on weekends in order to attempt having a higher train uptime.

As a precaution, Belgian railways NMBS/SNCB cancelled 34 trains during peak hours on Tuesday, when temperatures are expected to reach their highest point. This applies to trains that go to Brussels in the morning for example, and are parked there all day, heating up. Often, the cancelled peak-hour trains are also older trains, which are more sensitive to heat because of their age, says spokesman Dimitri Temmerman. These trains are therefore preventively cancelled.

Meanwhile in the UK, the East Coast Main Line was closed on Tuesday in precaution. Dutch infrastructure manager ProRail warned its customers of possible service disruptions occurring from the ongoing heatwave in the country. “The scorching sun creates a lot of heat. This could lead to malfunctions,” the company said.

“We try to prevent serious problems with preventive maintenance and inspections. As a rail sector, we continuously monitor our systems and intervene as quickly as possible if issues arise,” the company highlighted. ProRail also stressed that the heat would directly affect the tasks of railway workers, who will probably need to put into action heat operation protocols and take measures such as extra breaks and equipment cooldown.

It is 2022 now and railway track design, stabile, in x-, y- and z- dir., should be standard!
Quality pays, in particular at transports – as well for wares, as for persons.
Railwats, as in fact, all other public assets, shall provide for safe calculations, resiliently, thus robust, including for anticipated, or at least for known temperatures, etc., – for serious safety factors!
A shift is needed. A New Old Railway, now is requested!