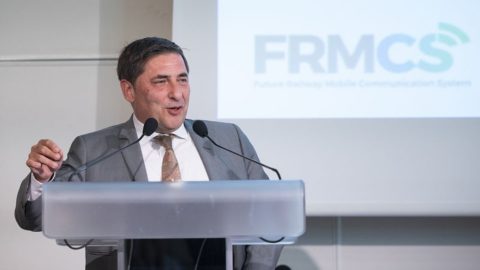 EU Member States are significantly behind schedule in rolling out their 5G networks, putting the EU’s timeline for the 5G rollout at risk. However, the delay will not affect the deployment of the Future Railway Mobile Communication System (FRMCS), says UIC’s Jean-Michel Evanghelou.

Target will not be met

The European Commission has set 2025 as the deadline for the rollout of 5G in all urban areas and on all major transport routes. In March last year, the Commission set a target to ensure EU-wide 5G coverage by 2030. The European Court of Auditors announced this week that the rollout of 5G is going slower than planned. They note that only half of the member states have included these targets in their national 5G strategies.

According to Jean-Michel Evanghelou, Head of Telecom, Signalling and Digital Applications at the Internation Union of Railways (UIC), the delay does not directly affect FRMCS. “The first implementations of FRMCS do not rely on the infrastructure of public network operators. They are seen more as an additional potential to gradually extend the coverage of FRMCS to certain railway lines with different service quality levels, depending on the profiles of applications to be deployed on these lines.”

UIC is developing FRMCS together with its members. Among other things, FRMCS offers the possibility to quickly process large amounts of data. Evanghelou reports that the rollout programme is progressing well, regardless of the delays in the public networks. He expects the target of having the technology ready for market by 2025-2026 to be met.

“The draft specifications for the first edition of FRMCS have been prepared as planned by UIC and are now being integrated into the CCS TSI 2022. At the same time, the first prototypes of the global system, including a prototype for the new built-in FRMCS (the “TOBA Box”, “Telecom On-Board Architecture Box) will be tested in the coming months as part of the Horizon 2020 industrial project 5GRail.”

Watch a video on the operation of FRMCS here: