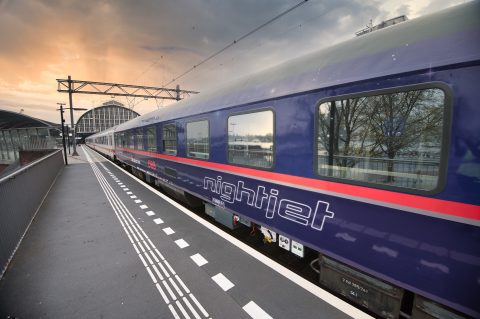 The first night train from Zürich arrived on Amsterdam Centraal on Sunday morning at 09:59 hours. In the evening the same train departed for the first time from Amsterdam via Basel to Zürich. With this, the night train connection between the Netherlands and Switzerland has officially started.

The 14-car train left Amsterdam Central Station at the beginning of Sunday evening at 20.28 and via the Ruhr area and Basel arrived in Zurich at around 08.05 the next morning. The night train that runs in the opposite direction also arrives every morning (09.14). The Nightjet Zürich consists of two sleeping cars with beds, four couchette coaches and eight seating cars.

NS takes care of the transport to Frankfurt. This means that an NS locomotive and NS employees are deployed. The other partners are SBB, ÖBB and DB.

“The new connection is launching at a time when international travel is not always easy due to changing coronal regulations. We choose to start the train connection Amsterdam – Zurich now”, says director of NS International Heike Luiten about the new night train, which has room for 876 passengers.

Night train between Vienna and Paris

“With Nightjet we offer a climate-friendly alternative to short-haul flights within Europe”, says ÖBB CEO Andreas Matthä. In addition to Nightjet Zurich, there will also be a night train between Vienna and Paris three times a week from 13 December.

“The new connections are a strong sign of international cooperation between the European railways. Only together can we build a European night train network for environmentally conscious travel”, Matthä added. The ÖBB chief is supported by his DB board member Passenger Transport Berthold Huber. “A strong rail offer is indispensable for achieving the EU’s climate targets. Europe’s leading railways are joining forces for the night train.”

An additional advantage of the new Nightjet connections is that they add 15 German cities to the European night train network. In addition to Amsterdam, the Zurich Nightjet also serves Utrecht and Arnhem in the Netherlands.

Our sister publication SpoorPro was in Amsterdam and made a video report: