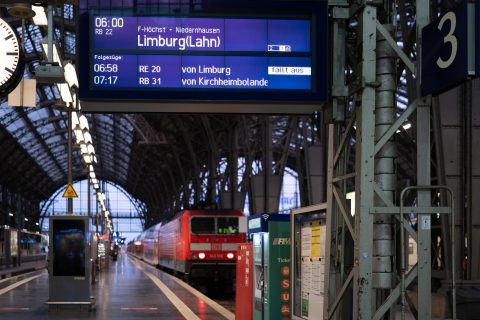 At DB Cargo in Germany, train drivers affiliated to the union GDL will strike again from Wednesday evening. The drivers of Deutsche Bahn passenger trains will follow one day later. The action will continue until 2 a.m. on 7 September. It is the third strike in a month.

According to the GDL, Deutsche Bahn is still not moving a millimetre in the collective bargaining dispute. “In doing so, it deliberately accepts economic disadvantages and burdens on travellers. All this is done with the aim of eliminating the GDL as the only critical trade union in the rail sector,” said GDL president Claus Weselsky.

During the first strike, which lasted around three days, 75 percent of long-distance trains in Germany were cancelled, as well as many disruptions in the country’s rail freight operations. After another three-day strike mid-August, the upcoming strike will be the longest strike yet, lasting nearly a whole week. For freight, the strike starts on Wednesday September 1st from 5pm. The strike for passenger trains starts on Thursday at 2 am.

According to Deutsche Bahn, the GDL is making both customers and employees victims of their power play. The company once again calls on the GDL to immediately start serious negotiations. According to DB there is a negotiable offer on the table, while according to the GDL there is none. DB Personnel Director Martin Seiler says in a reaction that a collective agreement is reached in negotiations and cannot be dictated. “This renewed strike does not bring us any closer to a collective agreement.”

DB’s current offer includes a 3.2 percent wage increase in two steps, as required by the GDL. Wages are expected to increase by 1.5 per cent on 1 January 2022 and by 1.7 per cent on 1 March 2023. Based on the collective agreement for the airport sector, DB has proposed a deadline of 30 June 2024. In addition, additional redundancy protection, thousands of new jobs and a high-quality old-age pension are part of the offer.

“Competing companies such as Transdev, Netinera and Go-Ahead have recently concluded collective agreements with the GDL. Although also affected by the corona pandemic, a wage increase of 1.4 per cent in 2021 and a corona bonus of 600 euros, as well as a wage increase of 1.8 per cent in 2022 with a duration of 28 months for all railway professions, did not constitute an obstacle for them. DB should follow suit”, says Weselsky.