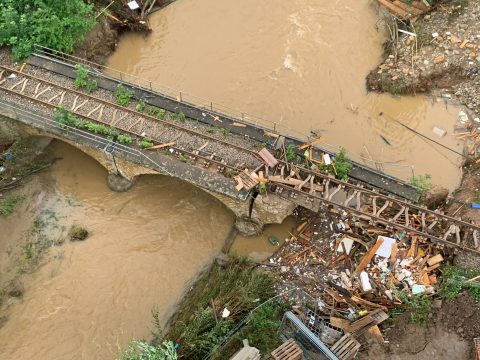 After the flood: European rail repairs will cost billions

Railways in Germany, Belgium and the Netherlands suffered large damages after the flooding. In Germany, a total of 600 kilometres of track are affected, and 80 stations damaged. Seven regional transport routes have been so badly damaged by the water that Deutsche Bahn has to build them from scratch or extensively renovate them, the company announced. The Ministry of Transport estimates the damage around 2 billion euros, reported German media. In Belgium, the damages amount to 30 to 50 million euros, and in the Netherlands to a half million.

Even if all exploration work has not yet been completed, one thing is clear: the repair and rebuilding work will take weeks and months, says Deutsche Bahn about the situation in Germany. Around 2,000 DB employees are clearing the tracks, stations and systems of debris and mud where the water has drained off.

A ministry task force met on Monday with representatives of German railway company Deutsche Bahn and federal roadway officials. Belgium and the Netherlands are also assessing the damage and work on recovery of the tracks in full force.

In North Rhine-Westphalia and Rhineland-Palatinate, the water has in particular the Eifel route, the Voreifel and Erfttalbahn, the Rhein-Ruhr S-Bahn line 9 (Wuppertal-Essen-Steele) as well as the Hagen-Bruges and the Ruhr-Sieg route (Hagen –Plettenberg) badly damaged. The Ahr Valley Railway has also been severely affected by the destruction, with seven bridges and 24 kilometers of track no longer existing or only in rudimentary form.

The repair will take weeks on other routes, for example on the section between Herzogenrath and Geilenkirchen on the Aachen – Mönchengladbach route or on the Bochum – Hattingen connection. In the areas particularly affected by the storm, the DB was able to repair much of the damage, often makeshift, in order to resume train traffic as quickly as possible. But there is more work to be done here as well.

Ingress of water has destroyed elevators or undermined platforms. The DB has now been able to carry out many minor repairs.

Infrabel CEO Benoît Gilson reports on Wednesday morning that lines 132 and 134 between Charleroi and Couvin can open ‘earlier than planned’. The line was initially scheduled to resume service on Saturday. “For the time being, we estimate the damage to be between 30 and 50 million euros. But the water has not yet disappeared everywhere. So we have to wait and see before we can make a good estimate,” told Infrabel spokesman Thomas Baeken to VRT.

In Belgium, many railway lines in the country’s south are blocked, a bridge has collapsed, mudslides have displaced the ballast, and many track sections and locations are no longer accessible due to ground subsidence under the rail infrastructure. “We have to lay a total of 70,000 tons of new pebbles, we have to replace several tens of thousands of sleepers, and more than 10 kilometres of railway embankments and subsidence have to be restabilised,” said Baeken. On Monday 19 July, Infrabel began reoperating some of the blocked lines. However, the Wallonian rail network will not be fully restored before 30 August.

The Netherlands: unexpected failures in the future

For the Netherlands, the damage is estimated at half a million euros by infrastructure manager ProRail. “Once the water has gone down further, we will still have to look at the culverts and underpasses in Limburg. That may uncover additional damage”, said a spokesperson on Tuesday to Dutch sister title SpoorPro. In addition, it is possible that cable work, foundations and other less visible infrastructure may have been damaged, according to the spokesperson. “This may only become clear in the coming months or years, for example because cables corrode more quickly. This could cause unexpected failures in the future.”

During the repair work, ProRail will study how best to carry it out with a view to the future. “In recovery, we are already looking at the way in which we can implement it in a climate-proof manner. A climate adaptation team that is involved in climate change and what the consequences are for the railways, will evaluate these weeks with us in order to come up with additional improvement measures.”