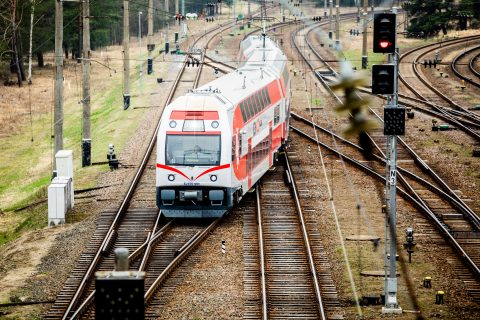 A study commissioned by LTG Infra revealed that 63 percent of the Lithuanian population would prioritise  electric vehicles – buses, cars and trains – over non-electric transport. Currently, only 9 percent of railway lines are electrified, but this will grow to 30 percent in 2023 with the electrification of Vilnius – Klaipeda. The study revealed that 71 percent of respondents agree that this railway section needs to be electrified.

“The survey shows that our decision to electrify the railway section from Vilnius to Klaipeda is based not only on economic and environmental calculations, but also meets the expectations of the country’s population”, says Karolis Sankovski, General Director of LTG Infra.  After the completion of this project, rail will be the first mode of transport in Lithuania which will transport more than half of passengers and cargo with electricity, he says.

The railway section transports 60 percent of the cargo transported in the country, and 40 percent of passengers. By adding the already electrified routes between Vilnius and Kaunas, Trakai and Kena, in 2023, electricity will transport the majority of cargo and passengers.

The research also showed that it is important for the Lithuanian population that railway transport pollutes the environment as little as possible. This was expressed by 85 percent of the respondents. The companies of LTG group have been using only green electricity produced from renewable sources for several years. “Therefore, by electrifying the railway between the capital and the port city, not only will we reduce 150 thousand tons of pollutants a year, but it will be a railway section where CO2 emissions will be zero”, says Sankovski.

The survey of the country’s population on rail electrification in was conducted by the company Spinter research November 2020. During the research, 1005 respondents aged 18-75 from all over Lithuania were interviewed.