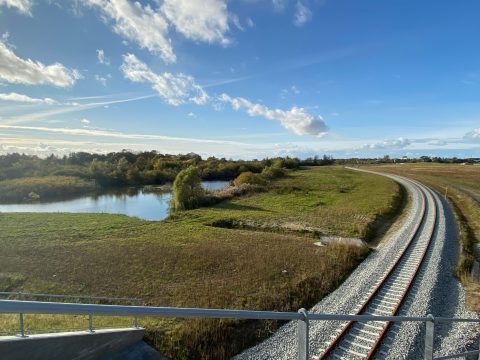 Banedanmark has established a 3 kilometre long railway to Aalborg Airport, Denmarks’ third largest airport. It connects the North Jutland region better with the rest of the country and abroad. The line will be electrified and equipped with ERMTS in the upcoming years, so that new electric trains can go into operation in 2026.

Together with a new double track to Lindholm and another on the way in Hjørring, the new railway line will give a boost to the infrastructure throughout the North Jutland region and make it easier for travelers to get to and from Aalborg.

“We connect parts of our country better by expanding the infrastructure across different areas. With a direct connection to and from the airport, it will be easier to travel to and from Aalborg for passengers from both Denmark and abroad”, says Minister of Transport Benny Engelbrecht.

In the coming years, Danish Infrastructure manager Banedanmark will electrify the line so that it will be ready for new electric trains in the future. Thus, the track is part of the green railway of the future, which in the long run will provide passengers with a shorter traveling time and a more stable train operation, according to Banedanmark.

“We are pleased that the new station at Aalborg Airport can now open. The work has proceeded according to plan, and we are continuing to install the new ERTMS signaling system. When it is ready in a few years – and the station’s capacity can be fully utilized – it will provide citizens with a railway with shorter travel times, fewer signal errors and a better and more stable train operation. Until then, we hope that passengers will be happy with the brand new railway line and station, which will make it easier to get directly to and from the airport”, says Lars Blædel Riemann, Area Manager for Construction West at Banedanmark.

The work of installing the new signaling system is expected to be completed in 2024. After that, it will be possible to utilize the station’s full capacity so more trains can run per hour. The new electric trains will run starting from 2026. 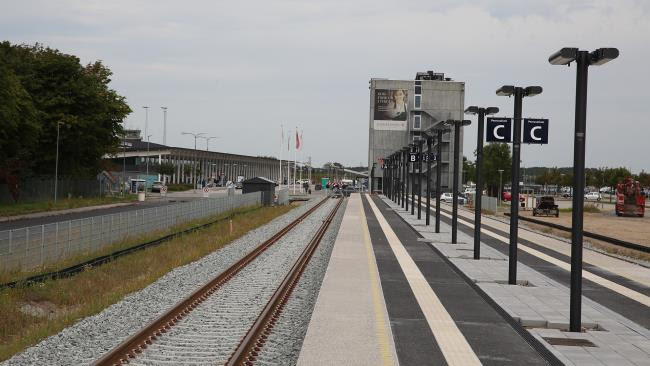 Train instead of car

At the airport forecourt, a station is built in close proximity to the airport building. The station consists of a 180 meter long platform that can operate trains of up to 204 meters.

“With the new railway, we also make it more attractive to take the train rather than take the car, as there will only be a 75 meter walk from the train station to check-in”, says Thomas Kastrup-Larsen, mayor of Aalborg municipality.