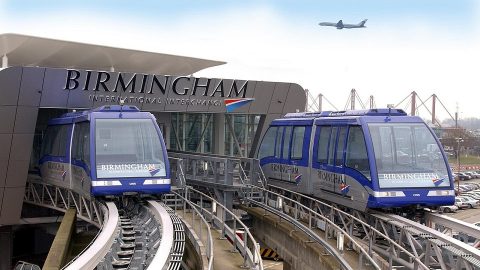 Aviation is moving faster in implementing Automatic Train Operation (ATO) compared to the rail sector. Over 50 airports in the world have their own automated guided transit systems. With their help, the airport operators are providing a fast connection between the terminals or to other types of mobility for almost half a century. These driverless systems are very similar to train networks but with some distinctive differences.

Airports and ATO… At first glance, they seem incompatible. However, the real-life experience suggests otherwise. More than 50 airports use automated guided transit systems. They are also known as people movers due to the PeopleMover transportation service having used at Disneyland Resort in Anaheim, California, from 1967 to 1995. Some airports have even two or three people mover networks. In five countries of the European Union (France, Germany, Italy, Spain, the United Kingdom) there are 12 airports with such driverless transportation.

Much more people movers (over 20 units) are located in the Americas. Most of them are in the United States where this innovation was invented and installed for the first time. Usually, the automated people movers in the airports use dedicated and elevated routes. The latter has short distances: from less than one kilometre to five kilometres. At the same time, these networks are served by the small scale rail or rubber-tyred vehicles.

From bus to train

As it was mentioned before, the first people mover was being used as a transport attraction since 1967. The automated four-car rail vehicles carried visitors of the Disneyland Resort between different attractions using the elevated tracks. This solution was developed by Walt Disney Imagineering on the basis of the Ford-designed technologies. Two years later, another U.S. company, Westinghouse, proposed its own concept of the automated people mover. Compared to Walt Disney’s PeopleMover, it was more like a bus that was able to run on the elevated concrete track. As a result, the Westinghouse’s prototype got a nickname Skybus (the word ‘sky’ was a reference to the elevated route). The U.S. engineering company proposed to install the new solution in the city of Pittsburgh. Due to the political opposition of the local authorities, the project has been never implemented.

The failure in Pittsburgh had not stopped Westinghouse in developing the new solution. In 1971 its transport division has managed to introduce the first automated people mover for the public transportation in Tampa International Airport. Eight guided rubber-tyred trains of C-100 type were produced to provide faster access to airside concourses of the airport’s terminal. These vehicles were more like trains but they were rubber-tyred. Therefore, sometimes they are called rubber-tyred trains because there is one rail to guide their way. All the features simplify the use of the automated people movers compared to the conventional trains on the mainlines with a mixed, passenger-freight, traffic with a lot of obstacles and objects alongside the tracks.

For Westinghouse, the project in Tampa was a real success. There were constructed six people mover lines to airside concourses (two of them were removed later). Afterwards, the people mover systems started to launch in various airports not only in the U.S. Other American companies such as Rohr and LTV also developed their own people mover solutions. However, the Westinghouse Transportation Division remained the main supplier. After the long series of mergers, this company became a part of Bombardier Transportation.

In 2008 the C-100 vehicles that have been initially produced for Tampa service were replaced with rolling stock of type Innovia APM 100 (also known as the CX-100). Later, Bombardier developed two next generations of these rubber-tyred vehicles – Innovia APM 200 and Innovia APM 300. This rolling stock is used not only for the people mover networks but for the metro lines too. In the 2000s, Mitsubishi Heavy Industries started to compete with Bombardier Transportation in manufacturing the people movers. The Mitsubishi-made Crystal Mover vehicles are operated in the airports of Washington, Atlanta, Miami, Tampa, Orlando and others.

In the mid-1980s the new types of rolling stock began to appear on the airport people mover networks. In 1984 Birmingham Airport got the automated maglev people mover network. In 2003 the maglev service was replaced with the cable-hauled automated system developed by the Austrian manufacturer Doppelmayr Cable Car. The similar, cable-driven solutions are operated in the airports of Toronto, Mexico, Doha, Oakland. Currently, the cable-hauled system is being constructed in London Luton Airport. Later, in 1991, Bombardier Transportation installed the monorail system at Tampa International Airport. It linked the main terminal to the long-term parking garage. Five years later, the same service was open in Newark Liberty International Airport in order to provide the five-kilometre connection between the terminal and the adjacent railway line.

Are you interested in the Automatic Train Operation (ATO)? This theme will be discussed at the Intelligent Rail Summit 2019 that will take place on 19-21 November in Paris. The event programme is available here.