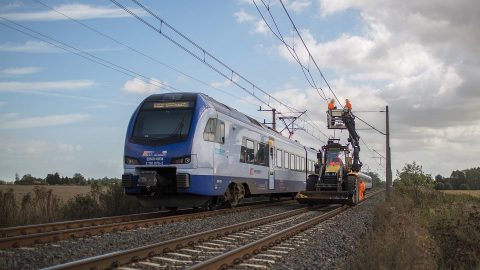 The allocations from European funds have become a big stimulus for the modernisation of the railway network in Poland. Another impetus is the development of the country’s aviation sector. More and more Polish airports consider the construction of the rail links with the adjacent cities. Even the project of Solidarity Transport Hub, the planned huge airport with potential traffic of 100 million passengers, also includes a huge railway component.

A month ago European Commission approved the allocation of over 660 million euros for the track modernisation in Poland. More than 117 million euros of this amount will be invested in the upgrading of the Tarnowskie Góry-Zawiercie line in Silesia together with establishing the train station at Katowice airport, the fourth largest one in Poland. The project is expected to be accomplished in May 2022.

The works have not yet been started in the vicinity of Katowice as the Polish media reported another attempt to establish an airport rail link. PKP PLK, the Polish rail infrastructure manager, is planning to prepare the feasibility study for modernisation of the railway network in the environs of Poznań. This could result in the construction of the rail link to Poznań Airport. Whether this is only considerations or real plans, we could say only in 3.5 years when the final document will be composed. Besides Katowice and Poznań, Warsaw Modlin airport, focused on the low-cost airlines, could also get its own rail link in the coming future.

Such attention to airport rail links in Poland is caused by great dynamics in passenger traffic of the country’s airports in the past three decades. For instance, in 1993 they handled 2.5 million passengers, while in 2010 the figure reached the level of 20 million passengers. Last year the entire passenger traffic of Polish airports was more than 45.7 million people. Of course, such a success was impossible without stable connections between the airports and the cities. On the other hand, the development of the Polish aviation sector stimulates all the stakeholders, including PKP PLK, railway operators, city and regional authorities, to develop the railway network.

The first airport rail link in Poland was launched in 2006. It connects Krakow International Airport with Krakow Main station located close to the city core. Afterwards, the chronology is as follows. In 2012 the airport rail links to Warsaw Chopin Airport, the Polish main aviation hub, and to Lublin Airport were open; in 2013 – to Szczecin-Goleniów Airport, in 2015 – to Gdańsk Lech Wałęsa Airport. The latest rail link in Poland was launched to Olsztyn-Mazury Airport in 2016.

As a result, six Polish airports (of 14 ones) with overall passenger traffic of more than 30 million passengers offer the train connections to the adjacent cities. The travel time varies from 15 minutes (in Lublin) to about an hour (in Gdańsk, Szczecin, Olsztyn). In Warsaw, this figure depends on the distance. If a passenger travels from the airport to Warsaw Central station, a journey takes up to 20 minutes. If he or she needs to reach some suburb, the travel requires up to an hour.

The fruitful cooperation between airports and railways does not stop here. Two years ago the Polish government announced the construction of a new airport in the vicinity of Warsaw. It will replace the current and overloaded Warsaw Chopin Airport and will be capable to handle up to 100 million passengers. The project named as Solidarity Transport Hub is estimated at 30 billion zlotys (around 7 billion euros).

It also includes a railway component. Around 1,600 kilometres of new high-speed rails should be constructed and 2,400 kilometres of existing lines should be upgraded by the end of 2027. All these works are devoted to creating a network of 10 high-speed rail corridors between the new airport and the major cities across Poland. The trains will be able to speed up 250 kilometres per hour or more in order to deliver passengers to Solidarity Transport Hub in two hours or two hours and a half.

A lot of discussions are being carried out among the experts and politicians. In spite of them, the government is serious in its intentions. Last year a specialised state enterprise Solidarity Transport Hub (in Polish ‘Centralny Port Komunikacyjny’, CPK) was established to implement the project. Currently, it is negotiating with the regional and local authorities to address the land questions. Also, the state-owned company is looking for investors. The sceptics and opponents are doubting whether the new airport together with 10 high-speed corridors will be ever constructed. Let’s wait until the end of 2027.