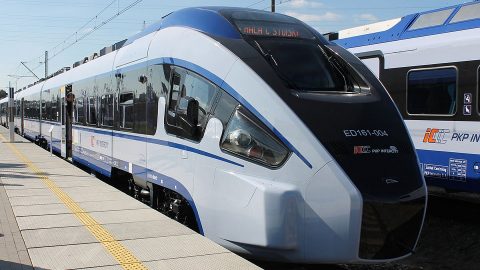 The new rail connection will be launched by PKP Intercity in cooperation with LOT Polish Airlines. The opening date depends on the approval to be issued by the country’s rail infrastructure manager PKP PLK. The long-distance operator has recently applied to it for obtaining permission to start a connection.

The new train will depart from Łódź Fabryczna station and stop at five stops (Łódź Widzew, Koluszki, Skierniewice, Żyrardów and Służewiec) before reaching the terminus in Warsaw Chopin Airport. The exact schedule is discussing. According to the Polish online media ‘Pasażer’, PKP Intercity plans four daily links with a departure from Warsaw Chopin Airport at 07:05, 11:05, 15:05 and 19:05. The link will be served by the Pesa Dart trains with seating capacity for 354 passengers.

Currently, Warsaw Chopin Airport has a good rail connection with the Polish capital and its suburbs. The rail links are provided by two operators – SKM Warszawa and Koleje Mazowieckie. SKM Warszawa serves two routes from the airport: one goes eastwards to Sulejówek Miłosna; the second route connects the airport with the northern parts of the city and the neighbouring suburbs in the Legionowo County. The SKM Warszawa trains run every day with a frequency of several connections per hour.