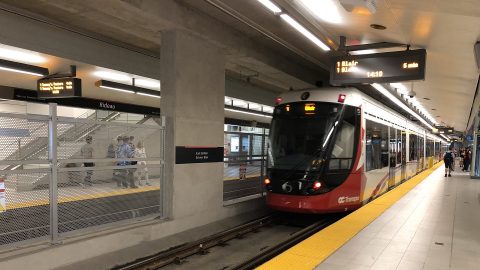 Canada’s capital city of Ottawa has launched tram service on the Confederation Line. The 12.5-kilometre network consists of 13 stations and provides a good connection for passengers with the bus and train services in the city. By 2025, the route will be extended with 16 new stations.

The inauguration ceremony of the Confederation Line was held on Saturday, 14 September. Ottawa has become the fifth Canadian municipality with the light rail service after Toronto, Edmonton, Calgary and Waterloo. It is expected that the system will carry up 10,700 per hour in each direction during weekday peak periods. This will make the Confederation Line the busiest light rail route in North America. The construction of the network cost 2.13 billion Canadian Dollars (circa 1.44 billion Euros) and is jointly funded by the Government of Canada, the Province of Ontario and the City of Ottawa.

The Confederation Line connects the Tunney’s Pasture government office complex with the Blair station, an important junction in the eastern part of the capital city. It provides good options for passengers to transfer to other modes of transport. Most of the stations are connected with the bus routes. At Tremblay station, the passengers are able to take the Via Rail trains running in the Quebec City–Windsor Corridor, the most densely populated region in Canada. Also, the customers can use the diesel trains of the Trillium Line, the non-electrified commuter route in the southwestern part of Ottawa. The connection is provided at Bayview station.

The new route is served by Alstom Citadis Spirit trams. Each of them is capable to transport up to 600 passengers — 240 seated and 360 standing. The Confederation Line is available for passengers from 5 a.m. to 1 a.m. on Mondays, Tuesdays, Wednesdays, Thursdays, from 5 a.m. to 2 a.m. on Fridays, from 6 a.m. to 2 a.m. on Saturdays, from 8 a.m. to 11 p.m. on Sundays and holidays. The trams run on the route with a different frequency: from 5 minutes in the morning rush hours to 15 minutes in the late evening. Until the end of September, the single ticket costs 3.50 Canadian Dollars (over 2.36 Euros). Afterwards, the price will increase by 10 cents (around 7 euro cents).

The newly launched line is a part of the O-Train network. Besides the Confederation Line, it also includes the Trillium Line. The latter is the non-electrified route with eight kilometres long and five stations. By 2022, it will receive two new extensions to Limebank station in Riverside South and to the Ottawa Macdonald-Cartier International Airport. As a result, the number of stations on the Trillium Line will increase up to 10. The line will be served by Stadler Flirt trains.