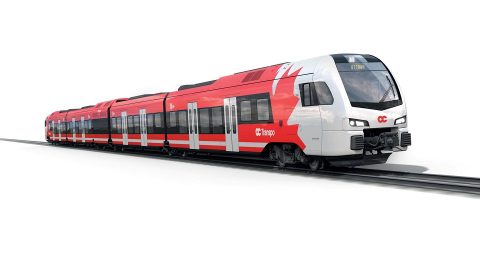 Swiss manufacturer Stadler Rail extends the geographical area for its Flirt trains. In mid-2021 the vehicles will appear in Canada to provide commuter service on the non-electrified expansions of the Trillium Line in the City of Ottawa. Canada is the 18th country to acquire the Flirt trains popular in Europe and the United States.

The deal is worth around 80 million Swiss Francs (circa 70 million Euros) and includes the delivery of seven four-car diesel multiple units. The supply of the vehicles will start in mid-2021. Afterwards, Flirt trains will be tested extensively. They are expected to be entered into service in 2022. The contract is the second project for Stadler Rail in Canada. Currently, the Swiss company is manufacturing the double-deck dome passenger wagons for the Rocky Mountaineer touristic train service in British Columbia.

The Flirt trains for Ottawa will be produced and assembled at the Stadler main facility in Bussnang, Switzerland. The vehicles will be designed according to the extremely cold climate of the region. Each Flirt will be equipped with four 480-kilowatt diesel engines. The trains will comply with several standards: Tier4 final (an emission standard for diesel engines), North American Track Class IV, ADA (North American standard for passengers with limited mobility), AODA (ADA’s analogue for the province of Ontario) and the North American fire safety standard NFPA 130. The Flirts can speed up to 120 kilometres per hour.

Since 2001 the City of Ottawa is operating the O-Train commuter service. It consists of two routes. The first one is the Confederation Line, the 12.5-kilometre electrified route to be launched in September. The second route is non-electrified Trillium Line with eight kilometres long and five stations.

By 2022, Trillium Line will be extended with two extensions. The eight-kilometre section will connect today’s terminus of Greenboro with Limebank station in Riverside South while the three-kilometre branch will provide a link to the Ottawa Macdonald-Cartier International Airport. The number of stations on the Trillium Line will increase up to 10.