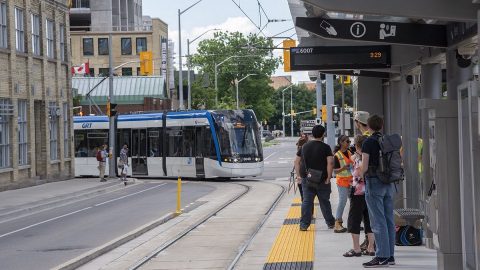 Canadian Regional Municipality of Waterloo has opened its tram network. The light rail system provides a connection between Waterloo proper and the adjacent city of Kitchener. In the future, the line will be extended to the city of Cambridge.

The tram network was branded as Ion after the atom, which it describes as being “always in motion”. An official launching ceremony was held on 21 June at the Fairway station. “This truly is a historic day for Waterloo Region. I am so excited and honoured to see the launch of ION light rail and I have no doubt that this will be a transformational transit system that will continue to shape our community for generations to come,” said Region of Waterloo Chair Karen Redman.

Currently, the Ion network consists of one 19-kilometre line and 19 stations. The construction of the route started in August 2014. More than 1.5 Euros were invested in this project significant for the Regional Municipality of Waterloo, the fastest-growing urban area in the province of Ontario. The Ion network is operated by the public transport company Grand River Transit and the consortium of GrandLinq (Keolis and partners). The future extension of the network will be constructed from Fairway station to Ainslie Street transit terminal in Cambridge by converting the bus rapid route to the light rail line. 14 Flexity trams delivered by Bombardier Transportation are serving the Ion line. The journey will be free of charge until Canada Day, i.e. 1 July.

The Regional Municipality of Waterloo has become the fourth in Canada to operate the tram network. The oldest and most developed system is located in Toronto, the largest city in the country. It was founded in 1861 as a horse-drawn system and was converted to the electric power in 1892. Now, the Toronto network consists of 10 lines with a total length of 82 kilometres and 685 stops. Two other cities with tram systems are in the province of Alberta – Calgary (CTrain) and Edmonton (Edmonton LRT). The first network was opened in 1981, the latter – in 1978. Both systems include only two lines. However, CTrain has a more total length (around 60 kilometres) than Edmonton LRT (more than 24 kilometres).