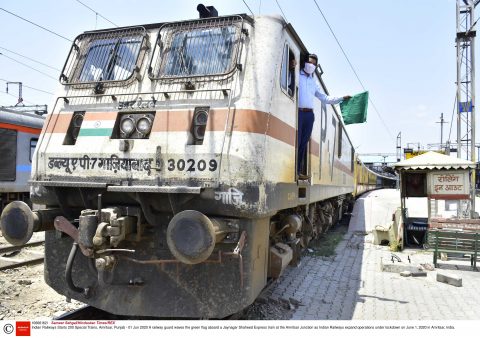 Although the name European Railway Traffic Management System (ERTMS) suggests otherwise, the rollout of the new train protection system is not limited to Europe. All over the world railways are working on variations with ERTMS as a starting point. In India, among others, a memorandum of understanding has now been signed for the start of a pilot on four routes.

Indian Railways is the largest railway company in the world with 115,000 kilometers of track and more than 7,000 stations, bigger than the Russian Railways and bigger than the Chinese railway company. With 1,500,000 employees, it is also one of the largest employers in the world. The company transports nearly 13 million travelers every day. Sanjay Kumar is closely involved in the implementation of ERTMS on the Indian railway from his position as chairman of the recruitment board. In his presentation at the two-day online event Railtech Infra Forum (28 and 29 October), he will discuss, among other things, the question of why India chose the European system.

“On the Indian Railways main route, we are struggling with a shortage of line capacity, requirement of SPAD protection and many collisions and derailments as a result of too high a speed,” explains Kumar. “To solve these problems, a large-scale implementation of a modern signaling and communication system is required.”

“ETCS / ERTMS was chosen because of the open standard and specifications. but also because there are several suppliers available who can supply products with interoperable functions (TSI certifications). Furthermore, it is proven technology that is validated and certified by international agencies. ”

As in Europe, India’s railways are also experiencing delays in ERTMS rollout, Kumar admits. However, a letter of intent has now been signed by Indian Railways with RailTel Enterprises Ltd-REL, a subsidiary of RCIL, for a pilot in which ETCS / ERTMS is implemented on four routes of Indian Railways.

“With this project we want to investigate the potential of ETCS Level 2. To reduce congestion on the railway network and increase line capacity, which in turn improves punctuality and increases the average speed of the train due to the automation of the train service and improves safety during use. ”

According to Kumar, the work should be completed about 30 months after the award of the tender. “The work was due to be awarded early this year, but due to excessively high bids and other issues, the tender could not be finalized and is still under consideration. This will result in a delay in the completion of the works, which runs until the year 2023-24.”

The main challenges that still need to be addressed before ERTMS can be implemented in India, according to Kumar, include the finalization of specifications for the functional requirements and specification of the system requirements with basic requirements for the said ETCS pilot project. “But we mainly face a financial challenge. The ETCS Level 2 solution proves to be mainly an expensive proposition. The lowest offer from different candidates for a pilot project was almost double the estimated cost.”

Sanjay Kumar is one of the speakers at the RailTech Infra Forum digital conference on 28 and 29 October. Look for the full program and registration on the website of the event.