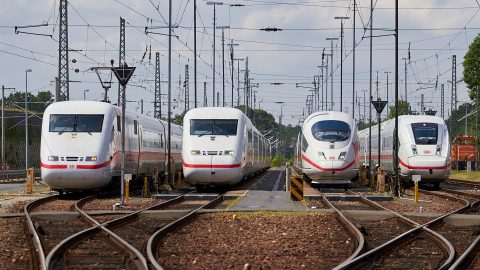 Despite all the difficulties and delays, the European Railway Traffic Management System (ERTMS) is being gradually deployed across Europe. To accelerate the process, the EU and the Member States need to pay more attention to several key issues. One of them is the modernisation of rolling stock, the European Coordinator for ERTMS Matthias Ruete noted at the online RailTech Infra Forum 2020.

There is a lot of talking about the feasibility and difficulties for ERTMS deployment in recent years. Meanwhile, the European railway operators and infrastructure managers are moving further in implementing this solution. As a result, the agenda of the process has been changed significantly. “To a certain extent, I have easier tasks than Karel Vinck, my predecessor as the ERTMS Coordinator, had. I can really say that it is no longer a question whether the ERTMS goes or does not. Now, it is a question of when and how,” the European Coordinator for ERTMS Matthias Ruete said during the second day of the RailTech Infra Forum that took place online on Thursday, 18 June.

At the same time, he reminded that the ERTMS deployment on the European railway corridors should be completed by 2030. This will allow replacing the wide range of signalling solutions across Europe into one unified system. Nevertheless, the current situation in this area is more similar to a patchwork, as Mr Ruete once noticed. This definition is still actual.

“I’m very convinced that in terms of the ERTMS, we have the islands, holes, and we don’t think about the network. We have to focus in the coming period on the interconnections between the Member States. If we don’t do than the ERTMS user should use other systems including the Class B solutions. We have to step up and get to the objective of 2030, which means that we need to have some ETCS and trackside deployment at some 400 kilometres average per year in the next 10 years if we want to get there,” the ERTMS Coordinator explained.

In order to answer the ‘how’ question, Mr Ruete highlighted several important issues in the ERTMS deployment. One of them is rolling stock. “We really need a normal onboard retrofitting strategy. We need to be much more ruthless in terms of the new vehicles, which are coming on the market. Normally, they should have the pre-installed ETCS but the reality is different. In the last years, there were around 5,000 new vehicles that came in the market. Of these, only around 900 units were equipped with the ETCS,” he specified.

Another important issue is speed. First of all, Matthias Ruete mentioned many successful examples in deploying ERTMS across Europe. Anyway, there is plenty of work to do in order to reach an ambitious goal to equip all the Trans-European network corridors with the system by 2030. That’s why the EU and the Member States should account every minute.

“We have to accelerate the ERTMS deployment. We are now in a situation where we have climate change, digitalisation, but also economy and industry recovery programmes. We think all the boxes. I worry that we are talking too long about hydrogen trucks, alternative fueling stations, and railway seems still to be a little bit old-fashioned thing,” the European ERTMS Coordinator added. However, the situation could be improved with the help of the ERTMS and railways will become “the main transport of the 21st century”, as Matthias Ruete stressed several times.