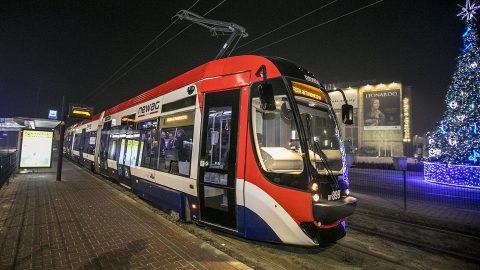 The first Polish autonomous tram has made its trial ride in the city of Kraków. It ran a distance of over 3.4 kilometres without a driver. The main goal of the experiment was to review the possibilities of the driver assistance system and its further introduction for the regular traffic.

On the night between 27 and 28 January, the Newag Nevelo tram has performed the first unmanned journey in the city of Kraków. It departed from the ‘National Museum’ stop (‘Muzeum Narodowe’ in Polish) and arrived at the final destination – the ‘Quiet Corner’ tram terminus (‘Cichy Kącik’ in Polish). After turning around on the balloon loop, the tram arrived back to the departure stop. The entire distance took over 3.4 kilometres.

During its self-driving journey, the vehicle carried passengers including journalists and officials. “It is the first time in the history of our city and entire Poland when we go by the autonomous tram,” noted Rafał Świerczyński, the President of municipal transport company MPK Kraków. The three-car Nevelo tram, also known as type 126N, was developed and assembled by Polish rolling stock manufacturer Newag. It is running on the city routes of Kraków since June 2013.

During the test driving, the development team was inside the tram. The technicians monitored the performance of the computer system which operated the vehicle. This solution was developed and installed by Newag. Within the project, Newag and MPK Kraków were assisted by the Cracow University of Technology, Rail Vehicles Institute ‘Tabor’ (also known as IPS ‘Tabor’) as well as by the companies of CYBID Sp. z o.o. and MEDCOM Sp. z o.o.

The automated technology is based on satellite navigation. It allows the vehicle to perform many processes automatically including the departure, stopping, emergency braking after the obstacle detection, closing the doors. The system was tested for reviewing its work and options on the real track. It is expected that this unmanned solution could be implemented for regular traffic.