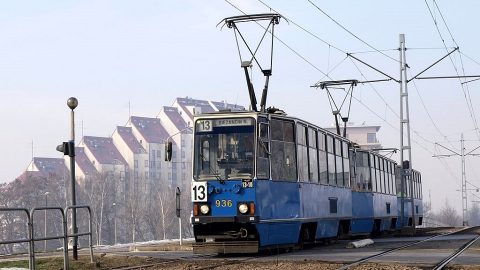 Krakow to retire high-floor trams in next few years

Public transport operator MPK Kraków will assign 1 billion Zlotys (around 234 million Euros) for the removal of the old high-floor trams from the Krakow city routes in the next few years. The outdated rolling stock will be replaced with fifty new, low-floor vehicles ordered this year, in addition to sixty units scheduled to be purchased next year. The transport operator will continue the procurements of new modern trams in subsequent years.

“It is important for us that only low-floor trams run on Krakow tracks in the next few years. We plan to allocate 1 billion Zlotys (around 234 million Euros),” the city’s mayor Jacek Majchrowski said after concluding the deal between MPK Kraków and Solaris & Stadler consortium. Fifteen low-floor trams will be delivered by the end of 2020, while the first 35 will be delivered by end of September 2020.

The purchase of 50 new trams was possible due to co-financing of the European Investment Bank (EIB). On 3 December, the financial institution signed an agreement with MPK Kraków, providing a 367-million zloty loan (around 87 million Euros) for the purchase of the new vehicles.

“This is the third EIB loan in the past ten years granted to MPK Kraków for the purchase or modernisation of rolling stock”, vice-president of the EIB Vazil Hudák noted. Since 2010, the Krakow transport company has received 618 million Zlotys (144.3 million Euros), including the new loan.

The EIB credit will be also be allocated for future procurements. MPK Kraków is planning to announce next year a tender for the supply of forty low-floor trams with an option for an additional 20 vehicles. In September, the transport operator started the technical dialogue on the tram specifications. The company intends to order low-floor vehicles of 30-35 metres long, equipped with air conditioning, ticket machines, passenger information system, etc. Each tram will have a total capacity of 220 passengers and be capable to run without overhead contact cables.

The tram fleet of MPK Kraków consists of around 400 units. The vast majority of them are the high-floor vehicles that were produced by Polish manufacturer Konstal in the 1970s or purchased from several German cities as second-hand units. The modern low-floor rolling stock numbers only 110 trams being supplied by Bombardier and Pesa since 1999 and 2015 respectively.