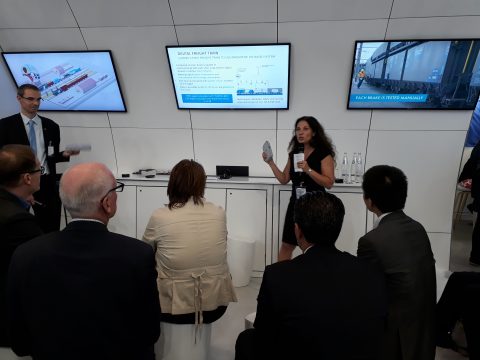 SNCF, Shift2Rail and Traxens have created digital brake testing for freight trains, the companies announced at trade fair InnoTrans 2018 on Tuesday. It is the first step toward creating a fully digital freight train, the companies said. The project received certification from the French railway safety authority last week. “This is not a project or a dream, this is a reality.” Shift2Rail, SNCF Fret and DB Cargo are going to test interoperability of the system in 2019.

“The past two years have been very exciting,” Bertrand Minary of SNCF Fret said. “We have created something entirely new. Today we are announcing digital brake testing for freight trains.” It took two years of testing to get the system right and to gain certification from the French railway safety authority EPSF. SNCF has been implementing and using the system officially since last week. Currently, 145 trains are retrofitted with the system.

According to Minary, there are three advantages. “First, this system is more efficient. It is twice as fast as conventional brake testing.” This improves the punctuality of freight trains. “Second, it is safer. It is no longer a physical job for train drivers.” Beyond safety, it is an arduous task that requires strength.

“Third, for freight train operators, it is flexible. It works on all kinds of trains and for different kind of purposes.” Brake test automation is only one example of what the system can do. It is one of the implementations for the system the combination of a device and sensors creates. This the companies call ‘the digital freight train’.

Florence Delalande of Traxens, who played a big role in designing the system, explains how it works. “Every train get several devices, each of which emits its own network. Together, they create a mesh network that covers the whole train. They communicate with sensors that can be put on different parts of the train. They transmit information locally to the driver to a tablet or cellphone, or worldwide to the cloud.”

Delalande explains that one device is compatible for multiple purposes. “It can be used by railway undertakings for brake test automation, fleet managers can monitor mileage or information on abnormal shocks and shippers can receive updates on wagon location.”

The system takes less than one hour to install anywhere, anytime. It is currently compatible with 80 per cent of the European wagon fleet and soon will cover 100 per cent.

Traxens, a company that creates digital solutions for shipping both by rail and boat, collaborated with the railway organisations on the project. Jacques Delort, General Manager of Traxens emphasizes that it hopes to create a system that is universal. “This will not only be delivered to SNCF, we want it to be an open system, so it can be used by anyone, everywhere.”

Delort goes on to compare the system to cellphones. “Whether you have a Siemens or Nokia, it always works. The device and sensors we make, are going to be able to communicate with all the other sensors you can find here at InnoTrans.”

Executive director Carlo Borghini of Shift2Rail commented: “Freight is a global service. We must not create new boundaries with this system, we want it to be interoperable and to integrate it with other systems. This is a success story and the first step toward delivering a digital freight train.”

Shift2Rail, SNCF Fret and DB Cargo have agreed to set up a pilot project on cross-border traffic aiming at testing the interoperability of different technologies for a digital brake test, as part of standardisation. It is planned for 2019.