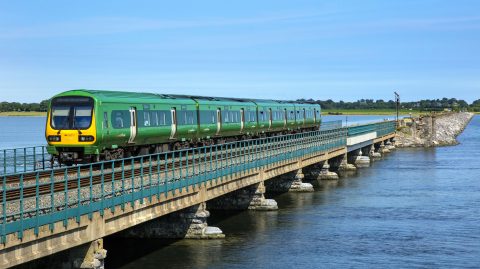 To promote sustainable travel between the two countries, Ireland and France plan to launch a ticket that combines French and Irish trains with a ferry ticket. It will be available by the summer of 2023.

French president Emmanuel Macron and Micheál Martin, head of government (Taoiseach) of Ireland, have decided the two countries will work on a single ‘Franco-Irish ticket’ for the train and the ferry. The leaders spoke over a working lunch last week when Macron visited Dublin. The goal is to promote travel between Ireland and France in a sustainable and simple way, at a reasonable price, they said in a news release of the French presidency. Particularly young people would be targeted with the ticket. The precise details such as prices will yet have to be determined.

In a similar initiative, France authorities are also working together with Germany for a “Franco-German” train ticket for young people with the goal of promoting travel between the two countries. French transport minister Clément Beaune and his German counterpart Volker Wissing announced this last November. More details will be outlined by the Franco-German Council of Ministers in January 2023, the transport ministers said in a joint statement.

“In order to achieve our climate targets for the transport sector, we must convince even more people to travel by train. To do this, we must provide attractive offers,” said Wissing, who was in Paris in November for a working visit at the invitation of his counterpart Clément Beaune. “I am convinced that with such a ticket, we will strengthen both the relationship between our two countries and the climate-friendly rail mode”, said Beaune.