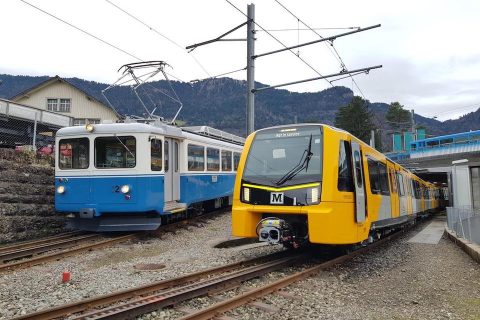 Destined for the city centres and suburbs of North East England, new Stadler-built metro trains have been spotted in the Swiss Alps. The trains are at the start of their long journey to acceptance and deployment on the banks of the Tyne and Wear rivers, in the decidedly less mountainous surroundings of Newcastle and Sunderland.

A new Stadler metro unit, designated Class 555 Metro by the manufacturers, has been photographed at one of the world’s most scenic railways – the Rigi Bahn in Switzerland. The new train was at Rigi in a holding facility where preliminary testing and commissioning takes place ahead of delivery of the unit to Velim in the Czech Republic for dynamic testing on a much larger testing track. Units are due to start arriving in the UK in February.

The new Stadler Metro train, pictured in our feature image by Martin Horat and shared on social media, was being made ready for static testing over in the Czech Republic. According to posts from the eventual operators, Tyne and Wear Metro, stationary rotational resistance moment measurements were conducted, along with safety against derailment tests. “These are vital processes ahead of the new fleet being delivered in 2023, with the first new train set to arrive next month”, said the operators.

The first of the 46 new Tyne and Wear Metro trains, which Nexus has on order from Stadler, will be arriving in North East England in just a few weeks. All the units will be put through further testing and driver training ahead of entering passenger service in the autumn of this year. They will replace ageing and life expired units, which have been a familiar part of the urban landscape in the region for over forty years. The new train sets will be technically superior to the outgoing fleet, including better passenger facilities, and an advanced traction control system, better able to cope with the perennial British problem of leaves on the line. They’ll also benefit from improved depot support as part of a wider modernisation of the network.

Unfavourable comparisons with other services

The Tyne and Wear Metro was originally adapted from a network of outdated heavy rail suburban services, which ran on first generation diesel multiple units, designed and built as part of the British Railways Modernisation Plan of the mid 1950s. When introduced, the new metro service was hailed as a great leap forward for the economic recovery of the region, which had lost much of its heavy industry, particularly maritime industries such as shipbuilding and was facing a steep decline in the traditional coal industry, for which the region is famous. The Metro was later extended to reach Newcastle Airport at Ponteland, and has been cited as a significant factor in elevating the airport to an international destination.

Heavy rail development in the region has also been planned to Ashington and Blyth, where a freight only line is to be resurrected for passenger use, and a disused line may be used to connect communities in the south of the region. However, the Tyne and Wear Metro has come in for public criticism over what is perceived as falling standards on the network. Many complaints have been raised about dilapidated infrastructure and unfavourable comparisons with other services, particularly in the south of the country, but also in places like Manchester, which is held up as an exemplar of efficient light rail operations.

From the North Face to North Shields

There has also been criticism of the decision to source the long-awaited replacement fleet from an overseas manufactured. However, Nexus, the operators of the Tyne and Wear Metro, point out that the tender to build was open to everyone. “All train manufacturers in the world were invited to bid for the work, as part of a global procurement exercise, Stadler won”, said a statement from the company. “We are bound by law to get the best price for tax payers.”

One correspondent was not as enthusiastic as the body of Newcastle native Geordies and Sunderland Mackems. “The journey these things go on [is] amazing”, they said, before dipping into typically self-depreciating term “Imagine starting your life in the majestic surroundings of the Swiss Alps, getting tested in the splendour of some historic Czech town, and then ending up just doing eternal runs around the desolation of Tyneside.” On closer examination of their comments – obviously a Sunderland Mackem from Wearside.