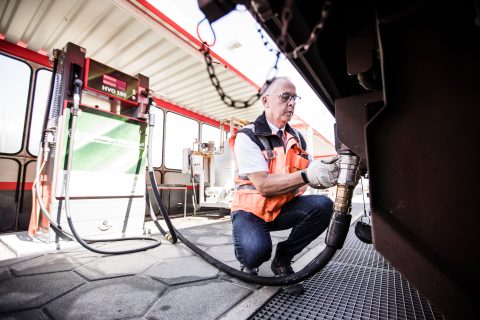 With 17 million litres of the biofuel HVO, Deutsche Bahn is using twice the amount of biofuel in its diesel locomotives at the start of 2023 as originally calculated. Their volume target of the use of HVO-fuel for 2025 is thus already reached. The company cites the successful conversion of diesel filling stations to HVO as the main reason for its progress.

The positive experiences in operation have strengthened confidence in HVO as a fuel, says Deutsche Bahn (DB). The railway company has already approved around 1,000 vehicles for refuelling with HVO in 2022, and freight subsidiary DB Cargo has already approved the entire fleet of 800 vehicles for the biofuel. In the next five years, the remaining 2,000 diesel vehicles in DB’s existing fleet will follow suit. With the first diesel phase-out measures, DB claims it will save at least 50,000 tonnes of CO2 by 2025.

HVO is a biofuel made out of waste and residuals of raw materials, and stands for Hydro-treated Vegetable Oil (HVO). Because it does not have a fossil origin, the CO2 emissions of the HVO fuel DB uses, which is produced with green electricity, are 90 percent lower than for diesel, according to DB.

“The decision to phase out diesel is a done deal at DB. We are investing a total of around 1.5 billion euros in the expansion of new drive systems and fuels by 2027 and are thus coming closer to climate-neutral rail, step by step”, said Richard Lutz, Chairman of the DB Management Board.

According to Sittipan Reinold, Program Lead Diesel Exit Rail at Deutsche Bahn, there is enough HVO available for DB’s operations, he said in a RailTech webinar. “In Germany, DB is consuming about 250 million liters of diesel”, says Reinold. The overall HVO production capacity in 2021 reached around 4 billion litres. DB estimates that there will be enough green HVO for at least all their own operations, and also for other market participants. All current HVO operations can be fueled with the high green standard HVO. According to their estimations, the amount of HVO with the greenest label is not yet at the level which is needed for all DB operations, but this will go up with the growing demand and should be sufficient with the gradual conversion of refuelling stations.

For new vehicles, DB relies on new forms of propulsion, such as hydrogen and battery technology. These measures complement the classic electrification via overhead lines and electric traction.

Want to hear more about shifting from diesel to sustainable rolling stock? Join the Rail Infra Forum on March 14-15 in Rotterdam or online, which makes the link between rolling stock such as hydrogen and battery rolling stock and using biofuel and the infrastructure needed for this. Speakers from Deutsche Bahn, TU Delft, TÜV SÜD Rail, Hydrogen Center Austria, TUC Rail, Plasser & Theurer and more are on the programme.