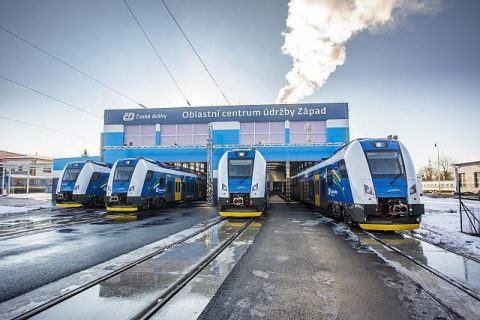 Czech Railways (České dráhy) has issued a tender for the supply and service of 15 trains powered by batteries as well as catenary. The trains should have a range of at least 80 kilometers in battery mode, and will be put into service in the Moravian-Silesian region.

České dráhy (ČD) plans to acquire the battery trains for various regions of the Czech Republic. “The plan to deploy battery trains has advanced the most for the Moravian-Silesian Region, for which we are now planning to purchase 15 battery units”, says Michal Krapinec, Chairman of the Board and CEO of České dráhy.

The deployment of the first battery trains is expected in 2025. The expected volume of investment, including the purchase of trains, selected spare parts and service for a period of 15 years, is around 140 million euros (3.4 billion Czech crowns).

Because the trains will be able to run both under the catenary and continue in areas without it, there will be less need for transfers. “Passengers will no longer need to transfer between electric and diesel trains. We will offer direct connections without transfers from various corners of the region, for example from Krnov or Budišov nad Budišovka, directly to the center of Ostrava, while replacing diesel-powered trains and reducing greenhouse gas emissions”, says Krapinec.

The dual mode trains will need a power supply from a 3 kV DC and 25 kV 50 Hz AC catenary, and a 140 AC/DC battery. In the future, České dráhy also plans to acquire another type of battery trains with only 25 kV 50 Hz AC and battery power for regions with a single power supply system.

The trains will feature low-floor cars with air-conditioned compartments, at least 135 seats across 1st and 2nd class, space for people in wheelchairs, strollers and bicycles, modern audiovisual information systems and power sockets for powering passenger electronics or Wi-Fi, says Jiří Ješeta, member of the board of directors and deputy general director of ČD for passenger transport.

The battery trains will be equipped with the European Train Control System (ETCS) and GSM-R communication system. When powered by the overhead lines, they will have a maximum speed of 160 kilometres per hour. Running on the batteries, the trains should reach 120 kilometres per hour. The units will be equipped with a recuperation system that will allow the electricity produced during braking to be returned to the traction network or to the batteries, reducing the energy demand.

The developments in battery and hydrogen trains and the associated infrastructure such as recharging and refuelling are the central themes of the Rail Infra Forum on 14-15 March 2023 in Rotterdam, the Netherlands and online. The programme and speakers can be found on the event website.

Sooner the better, a redundant el. supply shall be provided the railways!
(Any vital of society, dependant of el., has to be ensured redundancy!)
Claiming part of a high capacity inter modal system, railways now urgently has to shift, to hybrid, el. etc.
(Weak Link, now is due for Upgrading, for Shift!)
Now, all modes proving resilient…, upgrade – for lower costs, etc.
High quality management, is bonus…, provided, when safe “eta” is ensured, etc. (Compare Toyota Case!…)