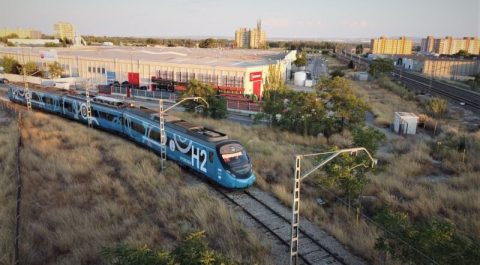 After having successfully performed static testing, the hydrogen-powered demonstrator train now started dynamic testing on an external track, in line with the project’s time schedule. FCH2RAIL is a consortium of the Spanish operator Renfe, infrastructure manager Adif, CAF and the National Hydrogen Center, as well as the Portuguese IP (Infrastructures of Portugal), Germany’s national centre for aerospace, energy and transportation research (DLR) and STT. Toyota Motor Europe provided the fuel cell system and integration support for the demonstrator train.

One of Renfe’s electric Cercanías (commuter) trains has been equipped with a new power generation system. The hybrid system uses energy from both hydrogen fuel cells and batteries and has been integrated into the vehicle’s existing traction system. As a result, it will become one of the first bi-mode demonstrator trains with hydrogen fuel cells. The train is able to run on electrified infrastructure as well as on catenary-free sections in hybrid mode.

During the dynamic tests, the hybridisation of the fuel cells and the batteries will be optimised on routes that have been specifically selected as being representative of those that would be used for commercial services. The system will be fully tested by a wide range of different power demand conditions, with the goal that the system can replace the diesel trains currently in use on many routes.

The project has a budget of 14 million budget euros, 10 million of which is being funded by the Clean Hydrogen Partnership, formerly FCH2 Joint Undertaking, a European Commission agency dedicated to promoting the development of hydrogen and fuel cells.

Interested about hydrogen and battery trains and the infrastructure needed to deploy them? Join the next Rail Infra Forum in Berlin on 12 and 13 October. For more information and registration, visit the website.

Accordingly, urgently, all technicalities of railways, in particular, those virtually not sustainable, but breaking…, thus currently proving serious drawbacks…, etc. now, as well, have to be attended!
Rail the most vital part…, of a 200 year old device, now is Weak Link… This is not sustainable!
(Safely calculable safety factors have to be provided for!… Now it is 2022 and rail, of all…, shall not be “fuse” – of railways…)