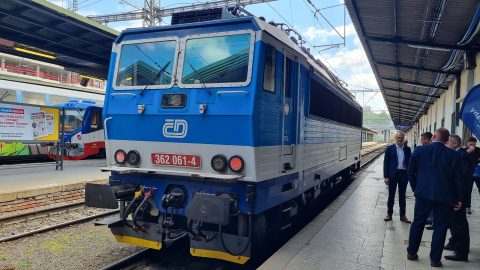 Representatives of ČD Telematiky and AŽD Praha ceremoniously handed over the first locomotive retrofitted with the on-board unit of the European train protection system ETCS to Czech Railways (České Dráhy) on Thursday. The Czech Republic aims to start exclusive operation under ETCS on selected corridor lines on 1 January 2025.

The significance of this ceremony was underlined by the participation of the Czech Minister of Transport Martin Kspka. The prototype vehicle of the 362 WTB Czech Railways series received the final approval of the vehicle type from the Railway Authority. This authorisation means that the vehicle is fully capable of commercial operation under ETCS on the domestic rail network.

“The introduction of ETCS is one of the important steps in strengthening railway safety, not only in our country but throughout Europe”, says Minister of Transport Martin Kupka. “We have already equipped several hundred kilometres of our lines with this unified technology and we continue so that we can start the exclusive operation of ETCS on the corridors in 2025″. The ministry intends to continue to use financial assistance from the European Union, in addition to national resources.

Tomáš Businský, Member of the Board of Directors and Director of Telecommunications and Infrastructure Services at ČD – Telematiky calls it “a symbolic embodiment of the turning point of Czech rail transport”, handing over the vehicle to Michal Krapinec, Director of Czech Railways. “Retrofitting existing vehicles with ETCS is the most common way for domestic hauliers to address the need to implement this pan-European security system.”

400 locomotives to be retrofitted

Czech Railways has contracted for more than 400 current vehicles to be retrofitted with ETCS, and also concluded contracts for 246 completely new vehicles with ETCS. Michal Krapinec, Chairman and Director of Czech Railways: “We have started training hundreds of drivers and will launch the first trains under ETCS supervision in the second half of this year.” The railway operator anticipates that the 400 vehicles retrofitted with ETCS will pass the approval process this year.

The Suppliers’ Association of supplier of railway telecommunications and signalling ČD Telematika and supplier of control and signalling systems for transportation AŽD Praha signed a framework agreement with Czech Railways in 2019 for equipping up to 131 electric vehicles with the ETCS system. With the intentions of the framework agreement, a binding contract was signed for equipping 102 traction vehicles of the series 162, 162 WTB, 362 and 362 WTB with an ETCS security device with a total value of almost 1.4 billion Czech krona (56 million euros). The successfully completed retrofit of the prototype vehicle is a significant milestone in the fulfilment of this binding contract. Alstom Belgium and ČMŽO elektronika also participate in the supply and installation of ETCS.