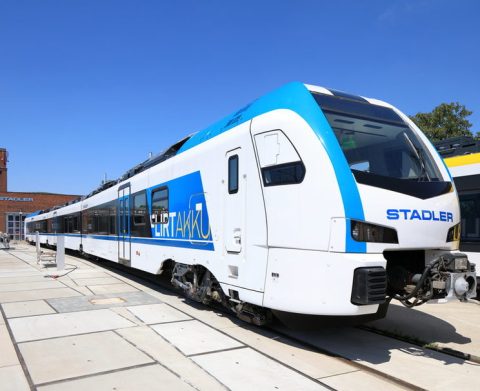 DB Regio has ordered 113 trains of the type FLIRT Akku from Stadler. The vehicles for Mecklenburg-Vorpommern will go into passenger service from December 2026, and 14 trains will also be used in the north-east of Germany.

The deal marks Stadler’s third supply contract for battery-operated vehicles in Germany. All of the vehicles will be delivered over the next five years.

Starting at the end of 2026, Deutsche Bahn will use the battery-operated vehicles from Stadler on a route that was previously serviced by diesel-operated vehicles in the so-called H-network in Mecklenburg-Vorpommern. This H stands for the use of electrical battery-hybrid vehicles. This means that these routes can be serviced without local emissions and without having to install catenaries throughout the entire network. The two-part vehicles of the type FLIRT Akku will be used for a transport period of 13 years on the network that runs along part of the Baltic Sea coast.

“If we consider the average life of a rail vehicle of around 30 years, battery-operated vehicles are more cost-effective than diesel-operated trains”, according to Jure Mikolčić, CEO of Stadler in Germany. The H-network Warnow has a service scope of 1.5 million train kilometres a year and covers the routes of the RB11 between Wismar – Rostock – Tessin and the RB12 between Bad Doberan – Rostock – Graal-Müritz.

The FLIRT Akku is the battery-operated version of the FLIRT type series by Stadler, which can only operate under a catenary. Most of the traction equipment and the most important mechanical components have been retained. The FLIRT Akkus provide space on 99 seats and has two multi-purpose areas for wheelchairs, pushchairs and bicycles.

In addition to purely electrical, diesel or mixed drives, Stadler also supplies the FLIRT with alternative drives such as batteries and hydrogen. For instance, Stadler developed the first FLIRT with a hydrogen drive for the American San Bernardino County Transportation Authority (SBCTA).