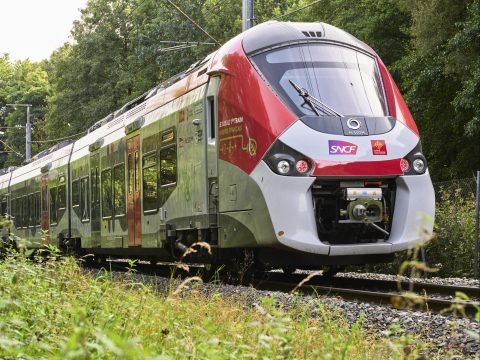 SNCF Voyageurs and Alstom announced the presentation of the first electric-diesel-battery regional train to be entered into service in France earlier this week. The start of commercial operations is scheduled for the second quarter of 2023 in the Occitanie, Grand-Est, Nouvelle-Aquitaine and Centre-Val-de-Loire regions.

The electric-diesel-battery regional train is the first Régiolis train that was converted under SNCF Voyageurs and Alstom’s hybridisation project, which commenced in 2018. After its presentation at Alstom’s Reichshoffen base, the train will begin trial runs on the French national railway network, which constitute the final phase of testing for the hybrid train. First trials began in 2021 at both Reichshoffen and the Velim test centre in the Czech Republic, testing the train’s traction modes at moderate and at high speed, respectively.

Thanks to its energy storage systems, the Régiolis units can use regenerative braking to feed kinetic energy back into its lithium-ion batteries. During testing, Alstom was able to validate a reduction of energy consumption by up to 20 percent, depending on the train’s itinerary. The energy storage systems gives the hybrid Régiolis a range of up to 20 kilometres on battery-power alone.

If commercial operations in the Occitanie, Grand-Est, Nouvelle-Aquitaine and Centre-Val-de-Loire regions are successful, Alstom will consider the hybridisation of the existing Régiolis fleet. SNCF on its part is working to offer the French regions alternatives to diesel-powered trains from 2024-2025 onwards, including hybrid train sets and hydrogen units.