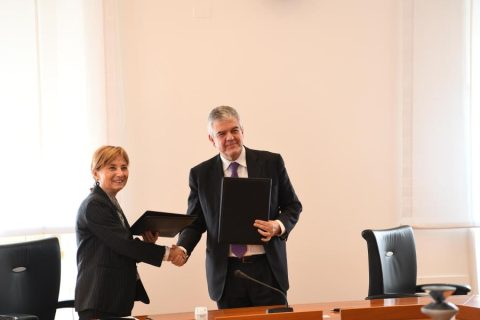 EIB to support purchase of high-speed trains by Trenitalia

The European Investment Bank (EIB) this week announced it will be supporting the purchase of high-speed trains by Trenitalia for use in Italy and Spain. The EIB will do so through subscriptions of Ferrovie dello Stato Italiane (FS) bonds worth up to 550 million euros.

The first 350-million euro trance was signed on Thursday. The money will be channelled to Trenitalia through an intercompany loan. The approved sum of 550 million euros covers half of Trenitalia’s purchase of 34 new high-speed train.

“The project boosts the expansion of high-speed transport on the trans-European transport network (TEN-T) in Italy and Spain, promoting a single railway market and the transfer of road and air traffic to railways, in line with the 4th Railway Package of the European Union (EU)”, the EIB said in comments on the arrangement. The 4th Railway Package is the legislation behind the revitalisation of the European rail sector and is designed to help establish a single market for rail services.

Trenitalia aims to use 14 trains in Italy, leasing out the other 20 to Spanish subsidiary ILSA. The trains in Spain will be used on the Madrid-Seville-Malaga, Madrid-Barcelona and Madrid-Valencia-Alicante lines. In Italy, the high-speed trains will enter service on the the Turin-Trieste and Milan-Naples-Salerno-Reggio Calabria lines.

The high-speed trains will be purchased from Hitachi, whose type ETR 1000 is known in Italy as the Frecciarossa 1000.