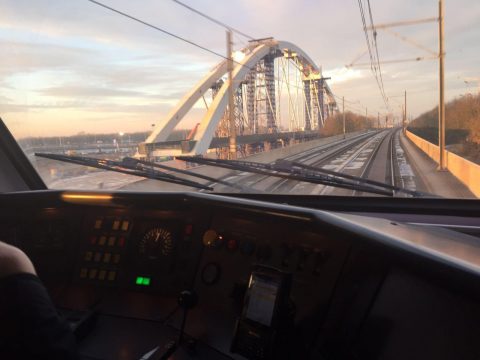 The deployment of ETCS on locomotives is too slow, which is ‘really bad news’, says Matthias Ruete, European Coordinator ERTMS at a digital event organised by UNIFE, the association of Europe’s rail supply companies. Current figures show that 5000 locomotives and traction vehicles are equipped with ETCS, while there should be something like 14.000 vehicles contracted, according to Ruete.

The European Coordinator ERTMS sees a number of countries who are moving ahead with trackside deployment, but if the locomotives do not have ETCS on board they will have to run two systems in parallel. “In reality we need to phase out the class B systems, so we need a dual strategy”, says Matthias Ruete.

The European Rail Traffic Management System (ERTMS) is a single European signalling and speed control system that ensures interoperability of the national railway systems. The goal is to replace all the different national train control and command systems in Europe. ETCS is the signalling and control component of ERTMS, which together with GSM-R, the communication system between the track and the train, makes up the system.

ETCS on all new vehicles

For a full ERTMS strategy, at least 30.000 vehicles should be equipped with ETCS by 2030, says Ruete, so there is a long way to go. For this, a method with both carrots and sticks would be needed, he says. The ‘stick’ would be phasing out of class B systems, and no more exceptions in terms of new locomotives without ETCS. The ‘carrot’ needs to be money, but also big support in terms of the European Commission regulatory side in terms of state aid, says Ruete.

Izaskun Bilbao Barandica, Member of the European Parliament of Renew Europe agrees that ETCS needs to be on virtually all new vehicles. “We want no derogations to be approved for the installation of ETCS in new vehicles and to streamline authorisation procedures. Without ERTMS, it will be impossible to keep up with our goals and double rail traffic in 2030. We need to multiply our financial effort by 10 to reach these goals.”

Installed on the track, but not in use

Instead of planning each project from scratch, long-term framework planning to deploy ERTMS is needed, says Klaus Mindel, UNISIG General Manager at UNIFE. “Italy is a good example of this, and doesn’t focus on developing projects on an individual basis.”

Italy has used ERTMS since 2005 on high-speed lines. For the last four years, infrastructure manager RFI started a programme of ERTMS overlapping the existing class B system. However, they had “extreme difficulty in using the systems in parallel and have double certification”, says Fabio Senesi, Head of Italy’s ERTMS National Programme. “We opened an ERTMS line 3 years ago, but no ETCS trains run on it. Because you have two systems, there is no incentive to use the new technology.”

According to him, installing the technology on-board needs to be financed in a different way with respect to now. “It is limited to only some calls under the CEF fund, but this is not permitting a full deployment of a fleet or network.”In 2018 RFI launched the idea to their minister to have financial aid for railway undertakings to permit the synchronisation of track-side and onboard developments. This idea was put on the Italian pandemic recovery plan, and was approved by the EU. Now, the first 3,500 kilometres of ERTMS on regional lines in Italy are financed within the recovery plan.

It’s not all bad news about ERTMS however, in terms of deployment on the infrastructure side, the outlook is better. There is the European deployment plan in which EU countries have committed themselves. This plan concentrates on the core network corridors. The aim was to have 15.700 kilometres installed by 2023. “Of these, 6.700 are already deployed and operating, and some 7.000 are under construction, about which I’m happy”, says Ruete. However, still 12 percent is missing for 2023 in terms of core networks. By 2030 all the core network corridors should be deployed with ERTMS.

The ERTMS coordinator also looked at the planning for 2040. “I’m actually quite amazed to see in terms of planning that there is around 80.000 kilometres of ERTMS being planned by 2040, including the UK, Switzerland and Norway. Therefore, it would be good to reflect whether we advance the deadline of 2050 to 2040 to make sure we have an ETCS system in Europe, so that you can run a locomotive through large parts of the EU.”

“we need to phase out the class B systems”.

No. There is no urgent need to phase out all Class B systems. That’s a multiple zillions costing technocratic ghost hunt. Only some obscure Class B should be phased out, e.g. Integra/ZUB, crocodile/memor and Dutch subsystem ATB-NG & belgian twin TBL. But that’s progressing quite well.

What we really need is a ‘free-to-lease’ multiple systems STM, including L3/L3+, ATO, V2V etc.