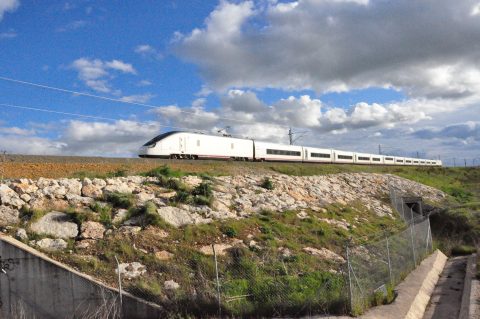 A Talgo Avril high-speed train, developed and manufactured by Talgo in Spain, has reached a key milestone this week: it has exceeded 360 kilometres per hour. The train’s new record was reached between Valladolid and Burgos as part of the homologation tests prior to its operation.

The new Talgo record was achieved this Monday by one of the 30 units whose manufacture and maintenance were awarded to Talgo by Renfe. The trains will run in Spain and France for over three decades.

The top speed was reached on a section of the new Madrid-Burgos railway line, between the town of Venta de Baños in Palencia and the city of Burgos. This infrastructure is still being tested and closed to passenger traffic. On board was a reduced team made up of Talgo driving staff and commissioning technicians.

The milestone achieved is only one of the approval stages that will be required for the circulation of Talgo Avril, along more than 30,000 kilometres on both European standard gauge lines (high-speed) and Iberian gauge lines (both conventional and high-speed).

The tests will also serve to validate the concept of automatic gauge change for very high-speed trains (those capable of exceeding 300 kilometres per hour). This new technology, developed in Spain, is already available on Talgo Avril trains. The trains adapt automatically to the two existing track gauges in Spain, which will allow high-speed services to be extended to the conventional electrified railway network. Infrastructure capacity on high-performance lines will thus be exploited to the maximum, and journey times will be significantly shortened in those destinations that they do not yet cover. These tests record the performance of all train elements, from rolling to traction, including energy collection and signalling systems.

By equipping half of the series (15 units) with these systems, Talgo Avril resolves a complexity that would otherwise hinder operating in the future. It is important for some destinations in Spain’s northern areas such as Asturias or the Basque Country, but particularly in Galicia. There, the high-performance inland rail network will be kept on Iberian gauge for a long time, unlike the rest of Spain.

Along with this test programme, the homologation of the Avril train in French territory is being carried out for its commercial operation by Renfe in the neighbouring country. This work is mainly focused on the technical validation of the on-board control systems of 10 of the 30 trains that have been adapted to operate in France.

Earlier this month, Renfe awarded Talgo the manufacture of up to 40 new variable gauge and 330 kilometre per hour commercial speed powerheads (locomotives). The maximum amount is 281.5 million euros, with a contract for 26 powerheads for 195.5 million euros, as the last step in transforming 13 conventional trains into very high-speed trains.