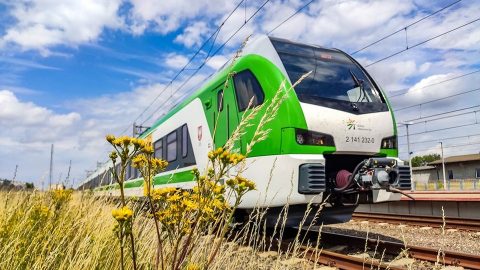 The Flirt trains are gaining more popularity among the Polish railway operators. This summer Koleje Mazowieckie added several vehicles of this type to its fleet. At the same time, Łódzka Kolej Aglomeracyjna is moving further with a modernisation project to increase the capacity of the Flirt units. More Stadler-made trains will be introduced in Poland in the coming years.

In mid-July two brand new Flirt trains of Koleje Mazowieckie debuted on the Warsaw – Sochaczew line in Masovian Voivodeship. Slightly earlier four other five-carriage electric multiple units of the same type increased the capacity on the Warsaw – Mława – Działdowo route. Before delivering the vehicles to Koleje Mazowieckie, Stadler Rail, the manufacturer of the Flirt trains, homologated the GUARDIA automatic train protection system for the first time in Poland. It was installed in the trains in accordance with the ETCS baseline 3.4.0, the ETCS levels 1, 2 and NTC (National Train Control).

As a result of this supply, Koleje Mazowieckie has a fleet that includes 16 Flirt trains. Ten other units have been operating since 2008. In the coming two years, the Polish regional operator will add more Flirt vehicles on its lines as it has a framework agreement with Stadler Rail for 71 Flirt trains including 61 five-carriage and 10 two-carriage units. The mentioned six trains are a part of this deal, which is valued at 2.2 billion zlotys (about 501 million euros).

20 Flirt trains are running on the routes of Łódzka Kolej Aglomeracyjna (ŁKA), a train operator in Łódź Voivodeship. These vehicles are in service since 2014 and 2015. In contrast to Koleje Mazowieckie, this operator decided to increase its capacity by extending the existing trains. Last year it signed a contract with Stadler Rail Polska for modernising 10 vehicles. Within the project, the third carriage will be added to these trains in order to increase the capacity from 120 to 186 seats.

The first extended vehicle was completed this July. Now it is being tested on the Żmigród railway test circuit near Wrocław. “According to the contract, the first three-carriage train will be commissioned in the second quarter of 2021. The extension refurbishment of the remaining Flirts will be carried out successively until the beginning of 2022 at the Stadler Polska facility in Siedlce,” ŁKA reported to RailTech.

Besides Koleje Mazowieckie and ŁKA, the Flirt trains are operated by two other Polish railway undertakings. Koleje Śląskie has four Flirt trains in its fleet. They have been operating on the regional routes in Silesian Voivodeship. Currently, the company has no plans to order new vehicles of this type.

As for PKP Intercity, the national operator of the long-distance lines, it has 20 Flirt electric trains. They are running across Poland. In 2019 the railway operator ordered 12 more units of the same type within the investment programme dedicated to renewing its train fleet. The first two vehicles are being manufactured by Stadler Rail to be completed in the first quarter of 2021 while the remaining 18 trains will be delivered to PKP Intercity in the second half of 2023.