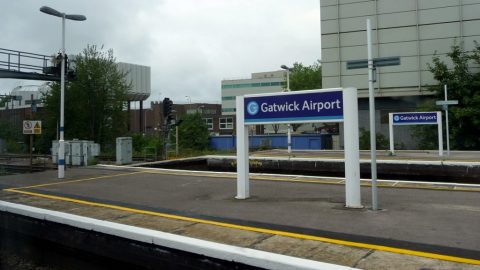 A totally new kind of rolling stock will be introduced on the UK’s railway network. It is the tri-mode vehicles that are able to run on the lines, which are powered with overhead wires and a third rail, as well as on the non-electrified routes. The first train of this type will run from Reading to Redhill and eventually to Gatwick Airport.

Great Western Railway (GWR), a British train operator owned by FirstGroup, is moving further towards upgrading its fleet with the brand new and innovative vehicles. Almost three years ago, on October 2017, it was the first railway undertaking in the UK that introduced the Class 800 bi-mode trains on its scheduled services between Bristol Temple Meads and London Paddington. This year, at the end of August, the railway operator added to its fleet the first tri-mode train of Class 769 Flex type. It was provided by Porterbrook Leasing and arrived at GWR’s Reading Depot for an extensive programme of staff training and testing. In general, the operator ordered 19 tri-mode four-carriage trains.

By early 2021, GWR intends to launch the innovative vehicle on its several routes, which are semi-electrified or equipped with different types of electrification. “Present plans will see the trains deployed between Reading and Basingstoke, Reading, Redhill and Gatwick, and on the Henley and Bourne End lines,” GWR stated. From one hand, the North Downs Line between Reading and Redhill is a real patchwork for the train operator: some of its sections are powered with the third-rail 750-volt system with direct current, the others are non-electrified at all. As a result, the entire route is served by diesel trains. Meanwhile, the Great Western main line (GWML) from London Paddington to Bristol Temple Meads (via Reading) is powered with the 25-kilovolt alternating current that is provided by the overhead wires.

The new tri-mode vehicles will allow GWR to improve the train Reading – Redhill services and to eventually extend them to Gatwick Airport. As the Brighton main line is also powered with a third rail, like the electrified sections of the North Downs Line, the Class 769 trains will be applicable on the way from Redhill to Gatwick Airport. “On the GWR North Downs line, the trains will facilitate a return to usual Sunday frequencies of two trains an hour, and the ability to run three trains per hour from Reading to Redhill on Saturdays. GWR is working with industry partners to extend this to further off-peak weekday services as well as extending these through to Gatwick Airport, as works at the station are completed,” the British train operating company noted.

The bi-mode Class 769 trains are not the novelty for the UK railway network. They are running in Wales and Northern England. However, the tri-mode modification will be introduced by GWR for the first time in the country. It is worth to note that the tri-mode Class 769 Flex trains are not completely new vehicles. They are based on Class 319 electric trains that were produced by the British Rail Engineering Limited (now is a part of Bombardier Transportation) in the late 1980s. Initially, these Class 319 trains were the dual-voltage vehicles, they were able to run on the electrified routes with both overhead wires and third rail.

Brush Traction, the Loughborough-based train manufacturer owned by Wabtec Corporation, converted them into the tri-mode units by installing MAN diesel engines. Within the modernisation project, these trains were refurbished inside and out, with free WiFi and power at each seat, air cooling, bigger luggage racks, and new seat covers. The tri-mode trains will enable the release of some of GWR’s diesel-powered Turbo trains to add capacity in the Bristol area and support the ability to launch new routes through the city.

I guess the next step in the future is for the trains to be converted to quad-mode by adding batteries,this will allow the diesel engines to be turned off at the stations reducing pollution on non-electrified routes and saving fuel,two studies found high levels of pollution at the few stations analysed in the UK including Paddington,London due to the diesel fumes,the batteries could be charged from the 3rd rails and overhead cables along with regenerative braking.I hope hydrogen replaces diesel.

I guess the next step in the future is for the trains to be converted to quad-mode by adding batteries,this will allow the diesel engines to be turned off at the stations reducing pollution on non-electrified routes and saving fuel,two studies found high levels of pollution at the few stations analysed in the UK including Paddington,London due to the diesel fumes,the batteries could be charged from the 3rd rails and overhead cables along with regenerative braking.I hope hydrogen replaces diesel

I also hope for this. As for me, the quad-mode trains will be universal